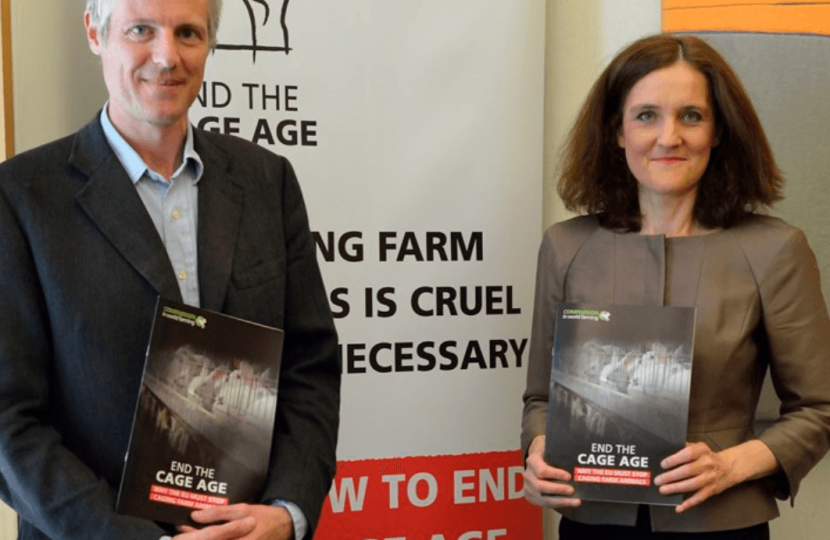 The event in Parliament was in support of a petition calling on the Government to ban the use of cages for all farmed animals. Over 95,000 British citizens have already signed the petition started by Dragon’s Den star Deborah Meaden, which is open until September 2019. When it reaches 100,000 signatures, it will be considered for debate in Parliament.

Zac showed his support for a future where British farming is cage-free, and the United Kingdom leads the way globally in ensuring the highest possible levels of farm animal welfare.

Despite the obvious failings of this outdated technology, around 16 million farm animals are trapped in cages every year in the UK. Cages confine, restrict and thwart many of an animal’s natural instincts. They are inhumane, outdated and clearly detrimental to farm animal welfare.

After attending the briefing, Zac said: “Several countries across the EU have already  prohibited certain cages that are permitted in the UK, and it is high time the UK took a more ambitious approach to introducing higher welfare farming systems. I am delighted to support the End the Cage Age campaign, which already has such widespread public support and call on the Government to deliver a cage-free future for British farming.”

James West, Compassion in World Farming’s Senior Policy Manager, said: “Cage systems are cruel and prevent so many essential natural behaviours. Yet, across the UK, millions of animals are confined in cages every year. This is despite a wealth of robust scientific evidence to demonstrate the suffering caused by ‘enriched’ cages for laying hens and farrowing crates for sows. The Government has stated on numerous occasions that the UK will be the global leader in farm animal welfare once we leave the EU. If it is serious about this ambition, it must embrace a cage-free future.”

To find out more about the End the Cage Age campaign visit: www.ciwf.org.uk/our-campaigns/end-the-cage-age