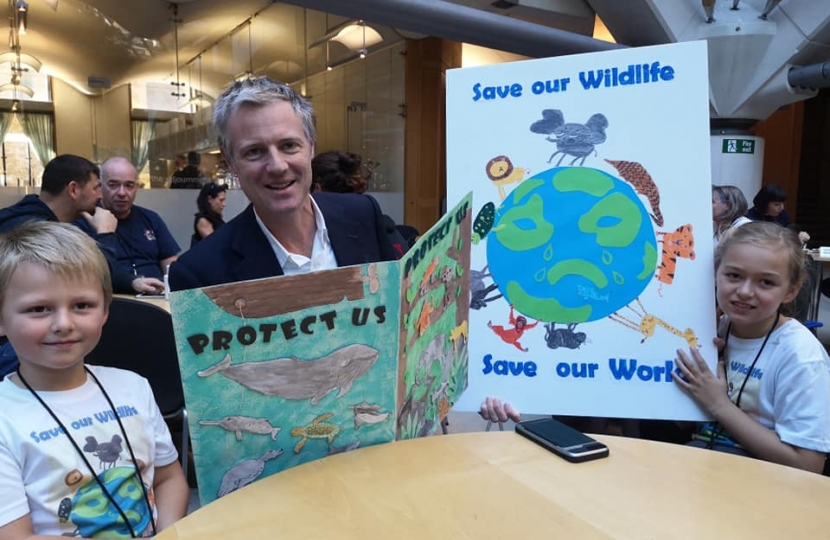 Zac met with Action for Elephants UK in Parliament on the 9th of October where he was presented with a card designed by Poppy and Max Mossman on behalf of  the group to show to delegates at the IWT conference on 11th October.

The conference is the fourth to be held on the illegal wildlife trade. This year’s will be the biggest yet, with representatives from conservation organisations, the private sector and from over eighty countries coming together to take steps to end the illegal trade in animals and their body parts. As a committed environmentalist and nature lover, Zac was asked by the government to be the “champion” for the conference and has been working with  its organisers to help set its focus and make sure that the right steps are taken to protect wildlife.

The grassroots group Action for Elephants UK was founded in 2013, following the worldwide iworry marches for elephants  that same year.

Also in attendance was headmistress Jane Ramsay who presented a card made by pupils at Burnside Primary School in Cramlington, Northumberland. Jane was instrumental in encouraging her pupils to write letters to Michael Gove in support of a total UK ivory ban.

Joanne Smith from Action for Elephants UK said “We first started thinking about getting schools involved in the run-up to the UK ivory ban consultation and we contacted thousands of them in the hope that they would write to Michael Gove to urge him to impose a total ban. Though we were disappointed by the low response rate, some schools did step forward and many children wrote wonderful letters to the minister. “

Maria Mossman, founder of Action for Elephants UK, said of the visit:

“We firmly believe that young people need to know what is happening to wildlife and the natural world in the hope that they will call on governments to ensure the future of elephants and other endangered species is safeguarded. In the last 40 years we have lost almost 60% of our wildlife and we are running out of time to save what’s left. The fight to save all living creatures is more urgent than ever, and we would like to see schools all around the country getting involved and teaching children to care for their world and the animals they share it with, writing to their MPs for extra protection and campaigning for stronger laws and enforcement to governments worldwide. This is also a great exercise for children to learn that they have a voice and they can make a difference! Will there be any wildlife left for their grandchildren, or indeed by the time they have left school?”

Zac Goldsmith MP said: “It is my honour to present these cards to delegates at the IWT conference to show that the younger generation is concerned with the plight of elephants due to the illegal wildlife trade. I am encouraged to see that the Government is continuing to take the matter of ivory trading with the seriousness it deserves.”