Zac Goldsmith MP Calls For An End To Puppy Farming 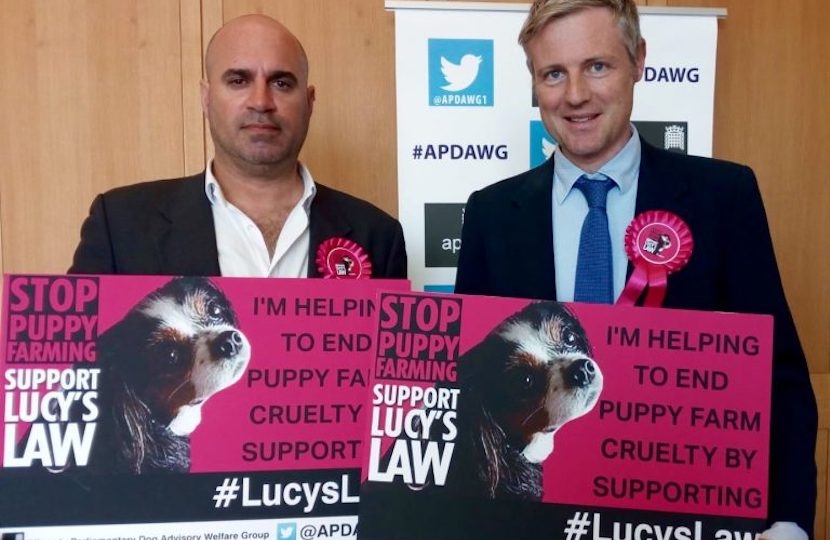 Zac Goldsmith has been campaigning to end the horrors of puppy farming for many years and was pleased to hear on the 21st May 2018 The Government say it could back our Lucy’s Law campaign.

Lucy’s Law is demanding a ban on the sale of puppies by pet shops and other third-party commercial dealers, a trade fed by cruel puppy farms in the UK and abroad.

George Eustice, minister at the Department for Environment, Food and Rural Affairs, hinted that Lucy’s Law could become a reality, saying: “The Government considers there is merit in exploring this further”.

He added that a final decision would be made after it has looked at the responses to the public consultation that closed on May 2.

In a dramatic day for the campaign, Lucy’s Law supporters including the Mirror handed the petition which has incredibly topped 143,000 signatures to Ten Downing Street.

“I’ve been privileged enough to have worked with Zac since 2014 to end puppy farming and he has been a phenomenal support throughout.  Zac has always made time for me, and has always been on the side protecting the animals. To me, Zac is a perfect example of an MP relentless in his pursuit for positive change for animal welfare; not just for Lucy’s Law to help end puppy farming, but for many important animal cruelty issues. Zac is always an absolute pleasure to work with, and his invaluable input has been hugely influential in making the exciting progress with Lucy’s Law, and as a direct result, we’ll all hopefully be seeing the end of puppy farm cruelty very soon.”

“”I’m pleased that the Government is finally looking seriously at the proposed Lucy’s Law. Time is nearly up for squalid puppy breeding programmes, and that is largely down to the magnificent campaign led by vet Mark Abraham and many supporters. I’m proud to have supported him in Parliament.”

The campaign is named after Lucy, a Cavalier King Charlies Spaniel saved from a rescue centre. Lucy was taken in by Lisa Garner and died in 2016.