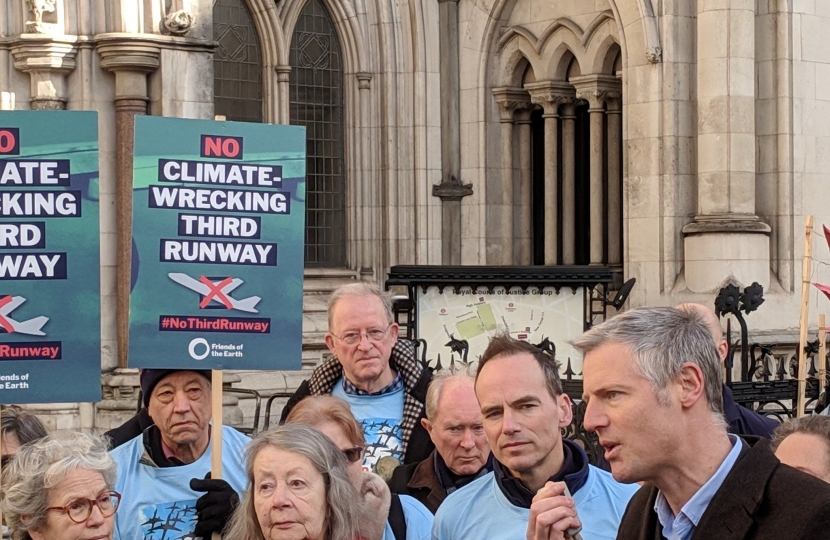 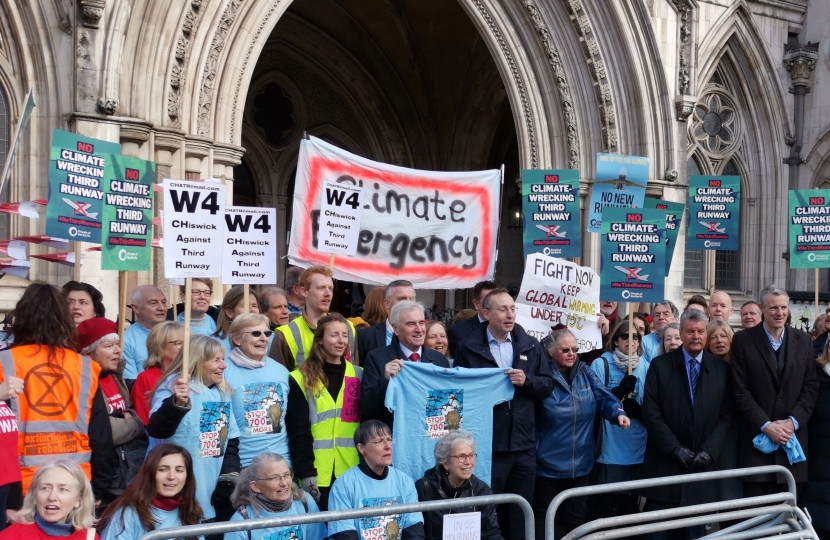 Zac Goldsmith MP joined fellow MPs, claimants, residents and NGOs outside the High Court on Monday morning to campaign against Heathrow expansion at the start of a two-week hearing.

The rolled-up hearings, expected to last until 22 March, will begin with two days of evidence form the Mayor of London, local authorities and Greenpeace, before moving to Friends of the Earth and Plan B Earth on Wednesday 13 March. The Government’s lawyers will respond from Thursday 14 March.

Beginning on 19 or 20 March the challenge from Heathrow Hub Ltd, who proposed extending the existing northern runway at Heathrow and was considered alongside Gatwick Airport as potential schemes for the Government to support instead of a third runway at Heathrow will begin. This challenge will look at whether or the decision making inside Government that led to support for the Heathrow third runway scheme was fair or not.

“Like many thousands of people in South West London, my constituents are already plagued by noise and air pollution from Heathrow – and that’s before Heathrow’s new proposals for 25,000 extra flights as well as the proposed third runway. It is particularly scandalous that Londoners aren’t being told where the new flight paths will be, and that surely makes a mockery of the Heathrow consultation. The case against expansion is stronger than ever, on every level, and I hope that the court case will demonstrate that Heathrow’s plans are not compatible with pollution and other laws.”

Rob Barnstone, Coordinator of the No 3rd Runway Coalition, said:

“Heathrow expansion was wrong 10 years ago and is wrong now. Not just for people around west London but for the whole of the United Kingdom.

“Before us is an environment-wrecking project that is set to be doomed from the moment the first spades are in the ground.

“Heathrow expansion is not fit for purpose and will only deliver toxic air-quality for Londoners, a failure to meet our national climate change obligations, no economic benefits for UK, stifled growth at regional airports around the UK, an absence of high-skilled, long term jobs, and thousands of homes destroyed or rendered unliveable.

“We deserve better from our Government than to be supporting this project with so little to gain in return. They should support our environment instead.”