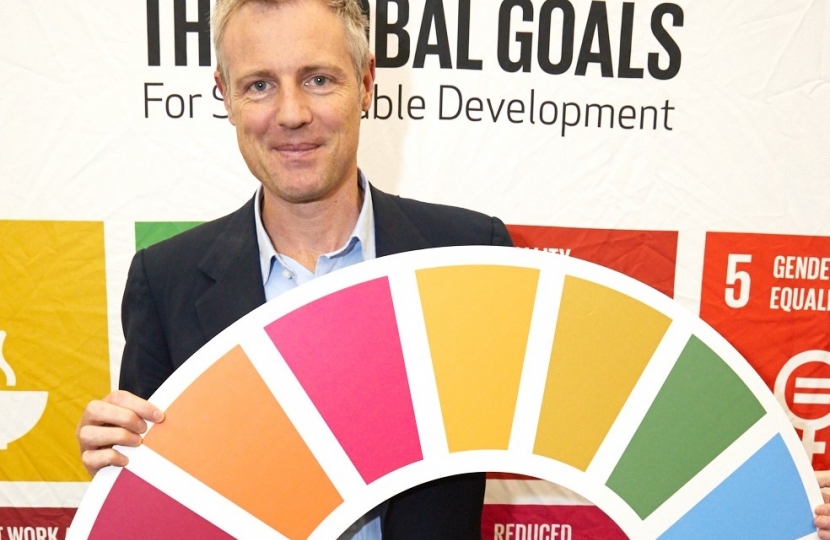 On Tuesday 13th November, Zac Goldsmith MP joined UN advocate Richard Curtis CBE, the Secretary of State for International Development Rt Hon Penny Mordaunt MP and former First Minister of Scotland Lord Jack McConnell to call for Britain to be a force for good in the world and lead the fight against global poverty.

Zac Goldsmith joined fellow parliamentarians to put a spotlight on the Global Goals and make a united call for Britain to lead the way in achieving these ambitious goals by 2030.

The Global Goals are the most progressive set of commitments to date, aiming to create a safer, healthier, and more prosperous world for future generations. Ahead of next year's Voluntary National Review which will look at Britain's progress in the implementation of the Sustainable Development Goals, Zac Goldsmith joined the call for Britain to raise our ambition.

The Department for International Development has asked people across the UK to share their work to achieve the Goals at home and abroad at https://www.gov.uk/sustainabledevelopmentgoals. Anyone who feels they have made a difference is encouraged to take part in the review, which will inform the UK’s official response to the UN on progress towards the Global Goals next year.

Secretary of State for International Development, the Rt Hon Penny Mordaunt MP said: “Every day, British businesses, charities, teachers and faith groups across the country do vital work to improve the lives of millions of Britons and help us achieve the UN’s Global Goals. The UK’s leadership on these Goals empowers women, builds prosperity and makes us all safer. I was delighted to be part of this event and want to hear more from the UK public on their trail blazing work.”

Richard Curtis CBE echoed this message: “The Sustainable Development Goals present a plan with optimism when the world needs it most. The UK has a vital role to play in driving positive change and ending poverty.”

Rt Hon the Lord McConnell, Co-chair of the APPG on the U.N. Global Goals for Sustainable Development and former First Minister of Scotland, said: “The Sustainable Development Goals are our best chance yet to end extreme poverty, protect our environment and prevent conflict. We can all contribute and the UK government should lead the way. Leave no-one behind!

Zac Goldsmith MP: "Britain is a force for good in the world and this is reflected in our commitment to achieving the Global Goals. Through united efforts and raising our ambition, we can begin to reverse the destruction of our planet, and create a more secure and prosperous world for future generations."

The Global Goals: In September 2015, world leaders, including the UK, agreed to 17 Sustainable Development Goals, also known as the Global Goals, which promise to end extreme poverty, inequalities and climate change by 2030. This was a historic and comprehensive global agreement, signed by the 193 UN Member States, paving the way for a better and more sustainable future for all. The Global Goals cover everything from gender equality, the environment, jobs and economic growth, anti-corruption, climate action, poverty and health.

This event was co-hosted in Parliament by the APPG on the UN Global Goals for Sustainable Development, the Coalition for Global Prosperity, Project Everyone and Bond.