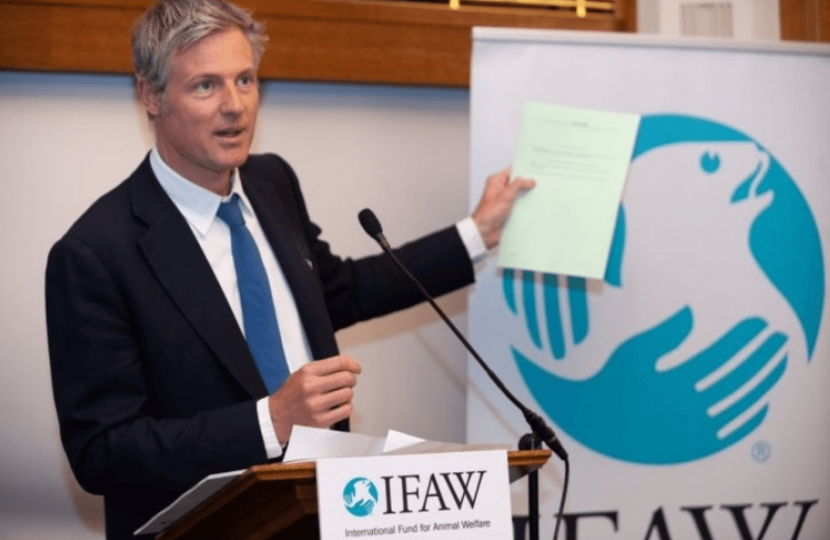 Zac Goldsmith, MP for Richmond Park and North Kingston, hosted the International Fund for Animal Welfare (IFAW) at Westminster last week to celebrate 50 years of successful campaigning to protect wildlife in the UK and around the globe.

IFAW was founded in 1969 after a group of concerned individuals first witnessed newborn seal pups being slaughtered on the ice floes off Canada’s East Coast. This work was expanded to cover new species and regions and today the organisation works across seas, oceans and in more than 40 countries, rescuing more animals and securing more habitats than ever before.

Zac hosted IFAW’s event at Parliament to celebrate some of the many animal welfare victories in the UK in recent years, from the passing of the ivory ban to protect elephants last December to last month’s passing of ‘Finn’s Law’ to better protect service animals from attack.

Zac said: “I have been a longstanding supporter of IFAW’s brilliant and cutting edge work to rescue and protect vulnerable animals around the world. With many species at a tipping point due to human exploitation, it is vital that we all play a part in protecting them for future generations.”

David Cowdrey, UK Head of Policy and Campaigns at IFAW, said: “IFAW is very grateful to Zac for his support for our work to help animals and people thrive in the place we call home. Huge public and political support helped bring about the vital UK ivory ban which will become one of the strongest ivory bans in the world.”

IFAW and Zac are now calling for the ivory ban to be extended to cover hippo ivory, to better protect hippos from the threat of poaching for their teeth. Globally, IFAW works to end the illegal wildlife trade, to stop commercial whaling and reduce other human-made threats to marine mammals, as well as rescuing, rehabilitating and releasing orphaned or injured animals in need.

Azzedine Downes, President and CEO of IFAW, said: “Humans make up less than one percent of all life on Earth, but we have destroyed 83 percent of all wild animals and half of plants on the planet. Still, we’re hopeful. Every species and every habitat has the ability to bounce back, and every person, everywhere has the chance to act. The future depends on what we do now.

“This work takes all of us. By rescuing, rehabilitating and releasing animals, one by one – by protecting their habitats and helping them flourish – we can save other species. And our own.”