' As we destroy the natural world, we destabilise communities and plunge them into desperate poverty. This week's Illegal Wildlife Trade Summit in London could not be more important.' 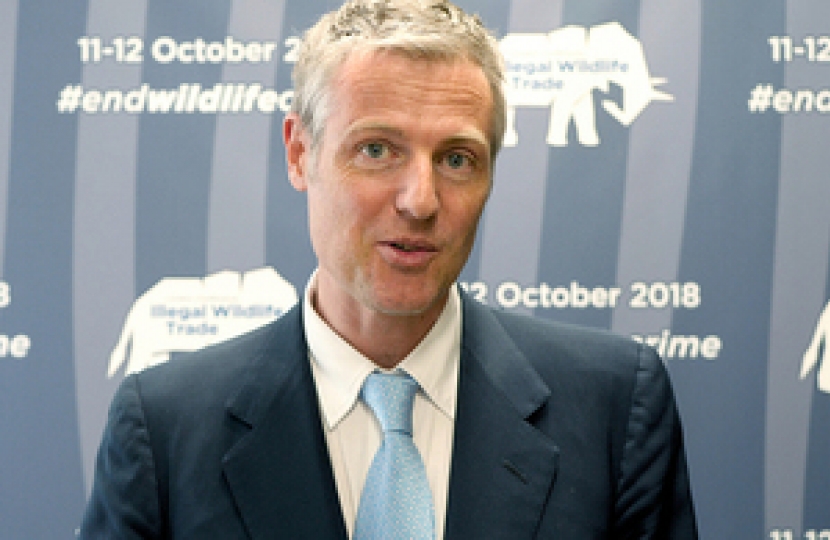 The environment is rarely rated by voters as their number one issue. That’s not surprising given people’s immediate priorities: if you have young children, the quality of local schools is likely to dominate; if you can’t afford to buy or even rent a home, housing is a priority; if you or a loved one is ill, the NHS is likely to be your primary source of concern.

But there are two reasons why the environment is, despite all that, the most important issue of all. The first, simply, is that we depend – for almost everything – on the natural world. Nearly half of the world’s human population depends very directly on local natural resources for their livelihoods, and even their survival.

The second is that we are annihilating the natural world. That is not a matter of opinion – it is a matter of fact. The danger of big statistics is that they can have an anaesthetic effect, but it is hard to avoid pointing them out: in my lifetime, we have lost nearly sixty percent of all wild animals; while on current trends, up to half of all species will be extinct by the end of this century. We are in the midst of – and responsible for – a mass extinction.

Decision makers, politicians and even some of the big development NGOs hold the rigid view that what is happening is a biodiversity tragedy – but not something that should get in the way of the real priority of tackling human poverty. It is a muddled and nonsensical position. Evidently, as we destroy the world, we harm people too.

As an environmentalist, I am saddened beyond measure at the destruction of nature and the loss of unique species. But it is not simply a biodiversity issue. A billion people depend on fish as their main source of protein. 200 million people depend on fish for their livelihoods. What are the consequences for them of the fact that fifteen of the world’s seventeen great fisheries are either exhausted or on the brink of ruin? Well over a billion people depend directly on forests. What are the consequences for them of losing some 20 million hectares of forest each year? It matters directly to us all that half the world’s farmlands are degraded and that well over a billion people live in areas of acute water shortages.

As we destroy the planet and its natural wealth, we destabilise whole communities, often plunging them into desperate poverty. Perhaps the clearest example of that relates to the growing illegal wildlife trade, which is the focus of a vitally important international conference being held in London this week.

Worth £17bn annually – and treble that if forests and oceans are included – illegal wildlife ranks as the fourth largest illegal trade in the world after drugs, people and weapons. This is serious organised crime on a huge scale, and there is evidence that it has funded some of the world’s most barbaric organisations, such as Al Shabab.

The world came together four years ago at the Illegal Wildlife Trade conference in London to address the issue, and the result was a ground breaking declaration that still sets the global standard. We saw UK commitments to provide funds for local communities to develop alternative livelihoods. In countries like Malawi and Gabon, the British army have been on the front line, training and supporting anti-poaching initiatives and successfully holding back the tide.

But the problem grows. Each year, 20,000 elephants are slaughtered for their tusks – the equivalent of one every 25 minutes. Four rhinos, one of the most endangered species on the planet, are killed every day for their horns. Over a million pangolins have been trapped and taken in the past decade, mostly for use in medicine.

This week’s conference therefore needs to go further, and given the high level attendance from countries around the world, there is reason to believe it will. We will see the launch of a powerful new ivory alliance, bringing countries and key players together to tackle the trade.

We will see private sector giants like eBay and Alibaba committing to closing down their platforms to anyone engaging in the trade, as well as leaders from e-commerce, tech, travel, tourism and transport coming together to lead work in their sectors to fight the trade. We will see pioneering organisations like WWF and Space for Giants working with nation states to press ahead with proposals for ambitious “green corridors” to protect threatened landscapes and people in key parts of Africa.

We can be proud of the leadership the UK has provided, not simply in pushing the issue higher up the political agenda, but also in leading by example. This year, we will pass a world-leading ban on the ivory trade, joining major consumer nations like China in closing down a key marketplace for legal ivory. Some of our overseas aid money is funding small-scale projects to disrupt the trade, such as protecting Sumatran tigers in Indonesia and clamping down on snow leopard trafficking in Mongolia.

This conference will not stop the illegal wildlife trade, but it is an important moment for the world to acknowledged the severity of what is happening on our watch to nature and the people who most rely on it, and for us to take united action. If we succeed, our planet will be safer and more prosperous. If we fail, the consequences don’t bear thinking about.