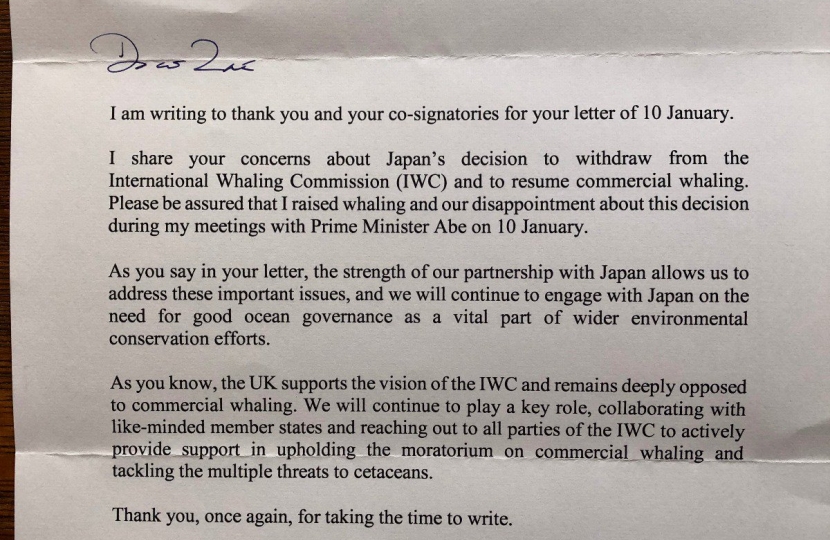 The International Whaling Commission introduced a ban on commercial whaling in 1986. However, in December Japan announced its intention to withdraw from the commission to resume the activity, and has since faced widespread international criticism. Zac led Conservative MPs in writing to Theresa May to ask her to raise the UK’s strong objections to this decision.

Prime Minister Theresa May wrote in her reply to Zac, "I share your concerns about Japan's decision to withdraw from the International Whaling Commission (IWC) and to resume commercial whaling. Please be assured that I raised whaling and our disappointment about this decision during my meetings with Prime Minister Abe on 10 January... As you know the UK supports the vision of the IWC and remains deeply opposed to commercial whaling."

Zac said, "The Environment Secretary recently called for 30% of the world's oceans to be protected by 2030, and we have an ambitious project of marine protected areas in our Blue Belt programme. This means we have a unique role to play in protecting our precious marine environment worldwide, and that includes talking to our allies about their actions which can have international consequences.

Japan's decision to resume commercial whaling will threaten these amazing creatures, and I know that many of my constituents were concerned about this, especially after watching Blue Planet and seeing how important whales are to the wider marine ecosystem. I am delighted that the Prime Minister spoke to the Japanese Prime Minister about our concerns, and I hope this will encourage him to reconsider. "

Zac had invited other members of the Conservative Environment Network (CEN) to write to the Prime Minister to ask her to raise their concerns. CEN Director Sam Richards said, "Just like our efforts to tackle climate change, protecting our most iconic marine creatures has to be an international endeavour in order to be successful. We wanted the Japanese Prime Minister to know the strength of feeling in the UK against his decision to hunt whales to the brink of extinction, and CEN MPs will continue to work to protect them."

Zac Goldsmith MP is a member of the Conservative Environment Network caucus, a group of MPs that drives the green conservative agenda in Westminster, supporting a list of principles including wildlife conservation efforts. Find out more: https://www.cen.uk.com/our-caucus/