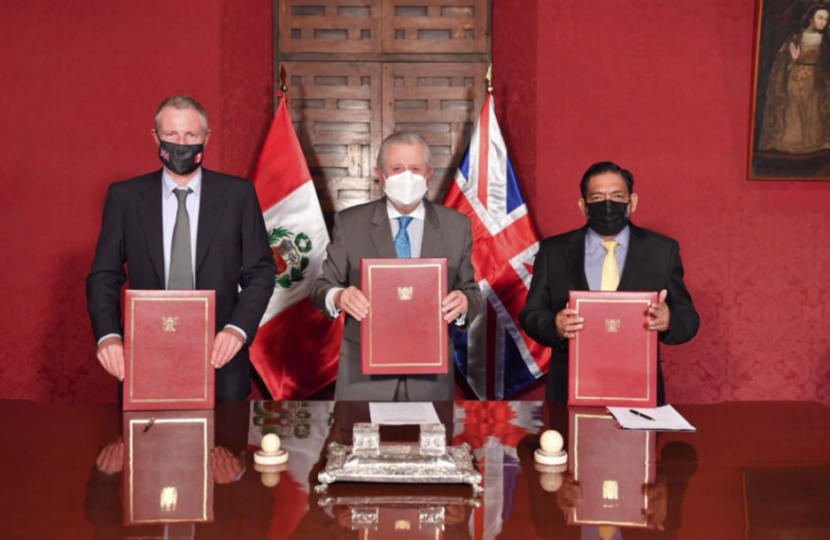 Foreign Affairs Minister Oscar Maurtua and Environment Minister Ruben Ramirez have signed a Letter of Intent for Cooperation between Peru and the United Kingdom towards the Biodiverse Landscapes Fund, which will enable the financing of sustainable development projects in the South American country.

The UK side was represented by the Lord Goldsmith of Richmond Park, the Minister for Pacific and the Environment at the Foreign, Commonwealth & Development Office (FCDO) and the Department for Environment, Food and Rural Affairs (Defra).

The UK minister highlighted the common values with Peru, particularly in terms of biodiversity conservation and the fight against climate change.

This initiative —promoted by the Lord Goldsmith— manages around £100 million in projects to conserve ecosystems, reduce poverty, and combat climate change in priority areas for biodiversity conservation.

El Condor-Kutuku Conservation Corridor has been identified as one of the six priority landscapes for the Fund, considering an allocation of up to £15 million during seven years.

The Biodiverse Landscapes Fund will be implemented after the two countries sign a Memorandum of Understanding in November, within the framework of the UN Climate Change Conference COP26, to be held in Glasgow, United Kingdom.

Peru will participate at COP26 holding the Pro Tempore Presidency of the Independent Association of Latin America and the Caribbean (AILAC) —a formal negotiating group, also made up of Chile, Colombia, Costa Rica, Guatemala, Honduras, Panama, and Paraguay.

Maurtua welcomed the visits by the UK delegation to review the progress of cooperation programs in the fields of conservation and biodiversity.

He also reaffirmed Peru's strong commitment to the fight against climate change.

Held on Monday, the activity also featured Economy and Finance Minister Pedro Francke, as well as Deputy Minister of Development of Family Agriculture and Agrarian Infrastructure and Irrigation Jose Muro.