Nations Must Come Together to Protect the High Seas 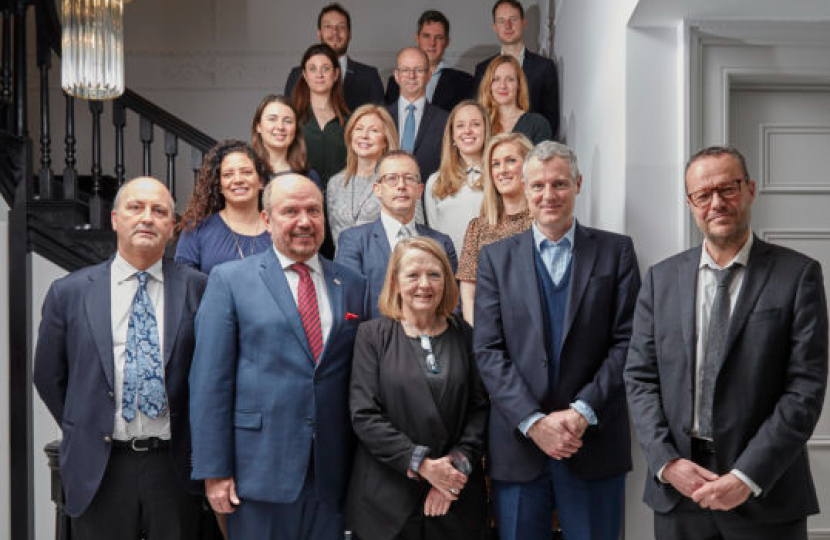 How can we encourage nations to come together to protect the high seas?

Prospect convened a roundtable of experts to discuss the importance of finalising an ambitious, conservation-oriented High Seas Treaty in 2020

“Ever since I started talking about environmental issues—ocean, terrestrial, climate—there probably hasn’t been a year when I haven’t said ‘This is the most important year.’ But this really does feel like the defining year,” Zac Goldsmith told a recent Prospect roundtable. “It’s the year where we have the opportunity—I would say the responsibility—to demonstrate to a world increasingly anxious about the state of our planet that we are genuinely serious about addressing those challenges.”

The Joint DEFRA and Foreign Office minister was reflecting not just on a year when the UK government hosts the COP26 climate change convention, but also the year that the nations of the world might finally reach agreement over how best to govern the high seas.

It was the latter topic—intrinsically linked to the former—that was the basis for the roundtable at which Goldsmith spoke. Supported by the High Seas Alliance, Prospect brought together scientists, politicians, business leaders and other interested parties in early March to answer one overriding question: “How can we encourage nations to come together to protect the high seas?”

Obscure and remote, the high seas account for almost two-thirds of the global ocean and cover an area that is one and a half times the size of the land area of the planet. The high seas are home to some of the world’s rarest species and bountiful resources. Crucially, they lie beyond the ownership and control of any single nation. They are a global common that many believe lacks proper governance. The result of inaction? A likely tragedy caused by over-fishing, unnecessary deep-sea mining and the hoarding of marine genetic resources through the patent system, among other threats.

The current governance structure is framed on the United Nations Convention of the Law of the Sea (UNCLOS), agreed in 1982 and based on negotiations which began in the 1970s. Much has changed in the intervening decades, not least man’s ability to exploit natural resources. As for an overarching treaty for conservation, sustainable use of the seas and to protect biodiversity, none exists today. “The current ocean governance structure has gaping holes,” noted Peggy Kalas, Director, High Seas Alliance. “It failed to foresee the technological developments that would allow us to go further and deeper into the ocean and, because of that, human activities are weakly regulated and poorly enforced.” To illustrate the point, around 1 per cent of the high seas is fully protected.

Kalas added: “In the span of just 100 years we have managed to do some sizeable damage to something that has existed for millennia—from plastic pollution, noise pollution, over fishing, illegal fishing. Threats from climate change and even threats from deep-sea mining are looming.”

“The science is really, really clear on the ocean and climate change,” said Carol Turley of the Plymouth Marine Laboratory. “The ocean is being impacted and will continue to be impacted in multiple ways at the same time, often in the same places. The ocean is one, and yet we’ve got multiple policy initiatives [and] they are just talking fora. We need to pull these things together.”

“The ocean is the biggest reservoir of carbon other than rock. The sediments are more important than peat—and yet we are ploughing them up. What is the point of that? To catch a few fish?”

In an effort to plug the governance gap and to pull things together, three years ago the UN established an intergovernmental conference to negotiate a new treaty. The mechanism for negotiations: a series of four two-week sessions, starting in 2018. The final session, due to take place from 23rd March to 3rd April 2020, has been pushed back in the wake of the coronavirus outbreak.

The trouble with treaties

The postponement notwithstanding, the need for urgency remains, as does an acceptance that multilateral negotiations on a global scale are devilishly complex. As Goldsmith noted, there were 800 amendments tabled in the run up to the previous session and another 300 amendments for the fourth and final session. “Each one represents a difference of opinion,” he said.

Marine protected areas (MPAs) provide a case in point, contentious for two reasons at least. First, the definition of what constitutes an MPA appears open to interpretation. “My concern,” said Dan Laffoley, Marine Vice Chair, IUCN’s World Commission on Protected Areas, “is that when the lawyers go home everyone will go, “Hang on a minute, how does this work?” This has got to work. We’ve got to stop messing around with standards and definitions.”

Second, there are nations around the world that would prefer to leave oversight to regional fisheries management organisations (RFMOs). This is potentially problematic: RFMOs are only able to regulate specific fisheries and have no mandate to control wider issues such as mining, shipping and pollution. “The push and pull right now is between the fishing nations—Norway, Japan, Iceland, Korea, and Russia, among others,” said Kalas. “They would prefer decisions to be made by the regional fisheries management organisations which for us is like putting the fox in charge of the chicken coop since their mandates are not conservation—oriented.”

Two nations with a vested interest in marine life and the industries it spawns are Costa Rica—1,300km of coastline and home to Costa Rica Thermal Dome—and Chile, a top ten fishing nation with 4,500km of coast line. Ambassadors from both countries were present for the Prospect discussion. Waldemar Coutts, the Chilean Ambassador to Norway, said: “Many fishing nations are not true believers in marine protected areas. You have to address this issue by using the language they understand, because MPAs not only protect biodiversity, help us tackle climate change but they also help us to recover certain fisheries.”

“The perfect is always the enemy of the good,” noted Patricia Zurita, CEO, Birdlife International, calling for an injection of pragmatism to ensure a successful treaty outcome. “We have to have something this year but something that is underpinned by the best science available while acknowledging we don’t know everything. And that we need to have a very strong approach to ecosystems and ensure we have precautionary principles.”

It was a view echoed by Alec Taylor, Head of Ocean Policy at WWF UK. While calling for an ambitious and transformational treaty, he acknowledged that it needed to be “universal, respected, signed-up to, implemented and enforced.” And in this spirit of pragmatism, Goldsmith posed a question: “If [local oversight] is a red line for some, what can we do to empower or influence those regional bodies to work within the coherent whole?”

Political will, craft and creativity

Given the complexities, is it even possible to get agreement? A number of roundtable attendees said success depended on political will. “We need to make this more political,” said Louisa Casson, Senior Political Strategist at Greenpeace International. “If we just keep this at a technical level, then we lack the negotiating mandate.” Casson argued for creative solutions—“political courage and political craft”—to accelerate a process slowed down either by foot dragging or what Laffoley called “analysis paralysis.”

By way of example of political craft, Casson cited the multilateral success of the 1987 Montreal Protocol that phased out production of ozone-depleting CFCs (chlorofluorocarbons) in common items such as aerosols and fridges. Similar political craft was evident at the Paris climate talks half a decade ago. Casson said: “One of the biggest interventions was when Xi Jinping and President Obama stepped forward together, both committing to have nationally determined contributions. That changed the dynamic.”

The imminent postponement of the final rounds of high seas treaty negotiations could offer a further opportunity, Casson suggested. “Now we have potentially a couple of months delay, we should think about how we use some of these other summits that are happening this summer focusing on oceans but also existing conferences—things like Commonwealth meetings in June.”

Coupled with political will, those committed to treaty success must “bridge the gap” with the public, according to Sophie Hulme, Director and Co-Founder, Communications Inc. She said: “Few people, particularly members of the general public, really understand the role of the oceans at the earth system level. It makes it really hard to understand the importance of the high seas.”

On political will, Goldsmith said: “The UK has a pretty good leadership position when it comes to the oceans. Of the great conservation stories this country could tell, Blue Belt [a UK programme to protect the marine environment] would be top of my list. We’re on track to protect an area the size of India.”

He added: “The UK role is different from its role in the past, in that we are not in the European Union. That gives us an opportunity to find our own voice, to be more assertive perhaps, to do all we can to build bridges.” He suggested that it might be possible to build a “coalition of the willing” in order to create critical mass that will overcome opposition to the treaty by force of numbers. “You don’t want to make enemies unnecessarily.”

The role of finance

He had another idea: a system of innovative finance to help acceptance and implementation of any future high seas treaty. Indicating that this was not yet government policy, he suggested that there might be a “gap in the market for some form of international fund.” He pointed to Fiji’s intention to launch a Blue Bond, designed to tap into capital markets in order to fund ocean-related environmental projects, as a potential model.

Rafael Ortiz Fábrega, Costa Rican Ambassador to the United Kingdom, welcomed the idea. “Costa Rica supports strongly the Global Ocean Alliance proposed by the UK to protect 30 % of the oceans by 2030,” he said before adding: “We have the will. We probably need the resources.”

There were positive noises elsewhere. Torsten Thiele, Founder, Global Ocean Trust, said: “We’ve been trying to find ocean solutions. Innovative finance is one of those solutions.” For such a scheme to work it had to do so through both public and private sector engagement—and it had to be able to demonstrate use case benefits, Thiele said. “Taking leadership on the financial solutions side is a real UK opportunity. It’s one of the strengths London has.”

The role of business

Finally, a question from one of the two business representatives in the room. What, Matthias Stausberg, Group Advocacy Director at Virgin asked, could organisations like his do to help protect the oceans? Julian Jackson, Senior Officer, Protecting Ocean Life on the High Seas for Pew Charitable Trusts, suggested that businesses had a responsibility to bring transparency to their supply chains in order to identify possible bad practice. Jackson acknowledged that this was not an easy task, citing the use of shark liver oil in the production of some cosmetics. “Famously squalene is very difficult to track,” he said.

Carol Turley urged businesses to think beyond the bottom line and engage instead in some transdisciplinary thinking. “Look beyond your own business. Look at the added benefits of connecting,” she said, “be it extracting an ore, off-shore wind farms or a certain type of fisheries.”

“We have understood the inextricable link between business and nature,” said Rebecca Morgan, Responsible Business Manager, Partnerships at Sky, which led a notable campaign against single use plastics. “We want to use our voice and our reach to make sure these messages are coming across to the public as well as government.”

“How can we encourage nations to come together to protect the high seas?”, a Prospect Breakfast discussion supported by High Seas Alliance, took place in London on Monday 9th March 2020.