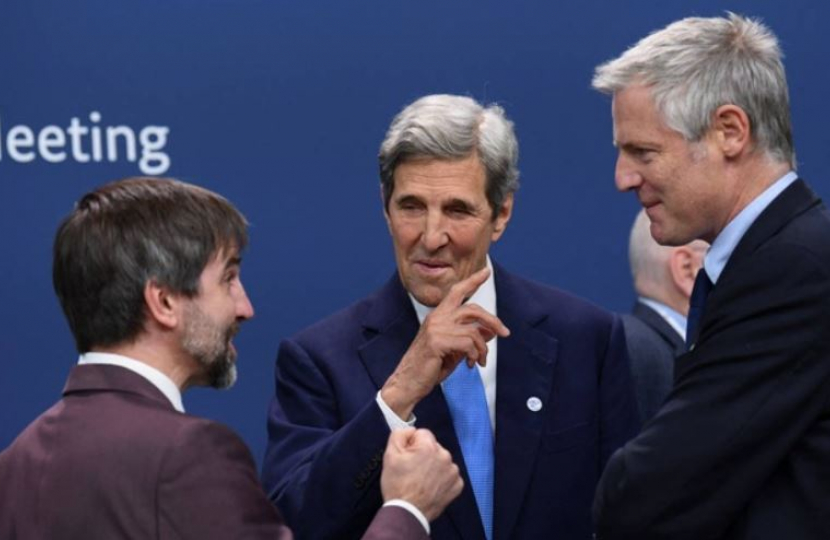 Lord @ZacGoldsmith in Berlin today for the @G7 Climate, Energy and Environment Ministerial - "This year we must deliver a Paris Moment for nature". pic.twitter.com/TPsoEFCPVg

Triumvirate of ministers to attend G7 Climate, Energy and Environment Ministerial hosted by Germany to push for accelerated action on climate and the clean energy transition

UK Government ministers will push the G7’s leading economies to drive forward progress on climate change, biodiversity and the clean energy transition at this week’s climate and environment ministerial.

UK Government ministers will push the G7’s leading economies to drive forward progress on climate change, biodiversity and the clean energy transition at this week’s climate and environment ministerial.

COP President Alok Sharma will be in Berlin (26 to 27 May) with Greg Hands, Minister for Energy and Climate Change and Zac Goldsmith, Minister for the Pacific and the International Environment representing the UK.

Mr Sharma will emphasise that current global crises relating to Russia’s illegal invasion of Ukraine and rises in the cost of living should increase, not diminish, countries’ determination to deliver on the Glasgow Climate Pact, and the Carbis Bay declaration, agreed at the conclusion of the UK’s 2021 G7 Presidency.

As the 2022 G7 President, Germany’s agenda for the G7 presents an opportunity for countries to demonstrate that, while the world has changed since the Pact was signed at COP26, their resolve to combat the chronic danger of climate change has not. Delivery requires an international effort to accelerate implementation and drive momentum ahead of COP27.

G7 energy ministers have already set out their view that the most important contribution towards energy security is an accelerated clean energy transition. The new reality imposed by Russia’s invasion of Ukraine underscores the critical choices facing us on our energy systems and the sectoral action we need to take in the relevant industries, including power and transport.

This comes ahead of the G7 Leaders Summit next month, which will take place from 26 to 28 June at Schloss Elmau in the Bavarian Alps.

Ahead of the Ministerial, Alok Sharma, COP26 President, said:

Now more than ever, countries must urgently show global leadership, work together and honour the commitments made both at COP26 in Glasgow and in Carbis Bay last year, where G7 leaders committed to protect our planet by supporting a green revolution that creates jobs, cuts emissions and seeks to limit the rise in global temperatures to 1.5 degrees.

This Ministerial can help to accelerate the shift to clean power generation and break our dependence on fossil fuels, and protect consumers and businesses from price volatility.

I look forward to meeting with colleagues from across the G7 nations, and working to deliver on the Glasgow Climate Pact as we continue to build momentum ahead of COP27 in Egypt later this year.

Minister Hands will also represent the UK at the Ministerial. He will emphasise the need for countries to advance their transitions to green energy. This follows the precedent set by the UK’s recently unveiled British Energy Security Strategy, especially in light of the current energy crisis and the necessity to reduce dependence on Russian hydrocarbons.

Fulfilling the Glasgow Climate Pact isn’t only essential for the future of our planet, it also makes strong economic sense.

Our Energy Security Strategy steps up the pace of our shift to green renewables, creating jobs and opportunities. I call on the G7 and the global community to seize the moment and join us in stepping up a green transition.

Lord Goldsmith will also attend on behalf of the UK and will call on the G7 to build on the commitments made last year to halt and reverse biodiversity loss by 2030 and make progress on the Glasgow Leaders’ Declaration on Forests and Land Use when over 140 leaders committed to halt and reverse forest loss and land degradation by 2030.

He will also stress the urgent need to continue to close the nature finance gap to meet international climate change, biodiversity, and land degradation targets and highlight the UK’s progress through its landmark Environment Act which includes a legally binding target to halt the decline in species by 2030.

Zac Goldsmith, Minister of State for the Pacific and the International Environment, said:

At COP26, we brought nature from the margins of the global climate debate into the heart of our response, because the beauty of protecting and restoring nature is that it helps us tackle so many of the greatest challenges we face – biodiversity loss, hunger, poverty, pollution, even pandemics, and the causes and impacts of climate change.

This year, we must make the UN biodiversity conference nothing less than a Paris moment for nature.

So I call on the G7 and the global community to rapidly scale up the finance for nature that is critical to getting an ambitious, robust agreement over the line – mobilising new investment from all sources, aligning our spending and overseas aid with the recovery of the natural world, and using every lever we have to help the market take nature into account.

The Glasgow Climate Pact sets out a clear framework for progress ahead of COP27 including:

Find out more about the Glasgow Climate Pact.

Signatories of the Carbis Bay Declaration committed to the following:

The key commitments in the UK’s British Energy Security Strategy are:

The UK has passed the world leading Environment Act which will protect and enhance our environment for future generations: