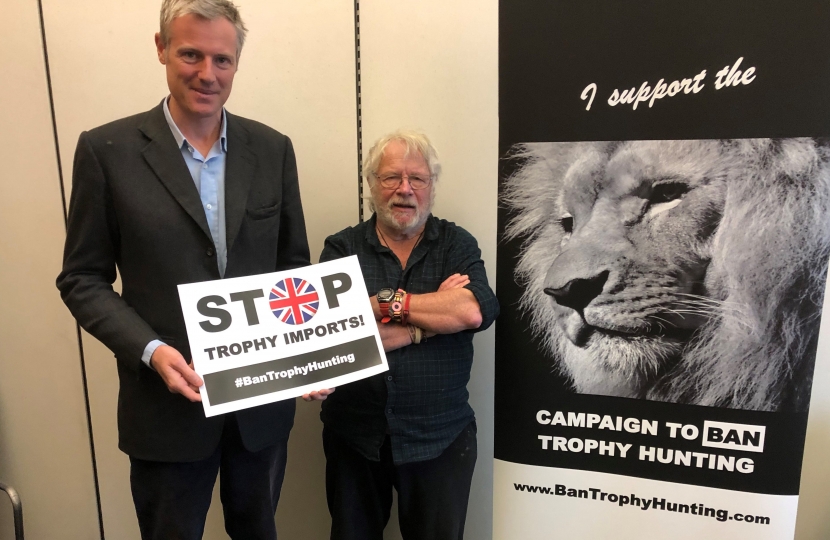 New figures released today show that nearly 400 hunting trophies from endangered animals have been imported into the UK in recent years, as well as almost 1 ton of elephant tusks.

Zac Goldsmith, MP for Richmond Park and North Kingston is now leading a cross-party campaign in Parliament which calls on the government to ban the import of hunting trophies. His Early Day Motion on banning trophy imports has already attracted the support of nearly 100 MPs from all the main political parties.

Commenting, Zac said: “Trophy hunting involves killing some of the most beautiful wild animal species on earth simply for fun. It is not only damaging to the endangered species themselves, the evidence shows that importing the parts also provides cover for a brutal illegal trade.  In more way than one, it therefore harms the communities that rely of wildlife for tourism income. It is high time we banned the import of the so-called trophies to the U.K.”

Conservationist and broadcaster Bill Oddie has backed Zac’s campaign, saying that trophy hunting was putting pressure on vulnerable wildlife: “Elephants, lions, leopards, cheetahs and rhinos are all fighting for their lives. We could see all of them go extinct within a generation. When you've got a scattered, dwindling population, the loss of a handful of animals doesn't just cause a ripple effect - it can be like a tsunami wave. Trophy hunting has always been senseless cruelty. Letting people kill them because they think it's entertaining is just insane, especially when you’re talking about wildlife with such a vulnerable status”.

“British trophy hunters are targeting endangered animals. They have killed literally hundreds of elephants, hippos, leopards and lions - and then brought back their body parts for show. Zac is right to speak up for his constituents who clearly want to see an end to

this. Australia, France and the Netherlands have introduced import bans. We hope the UK government takes action before it is too late.”