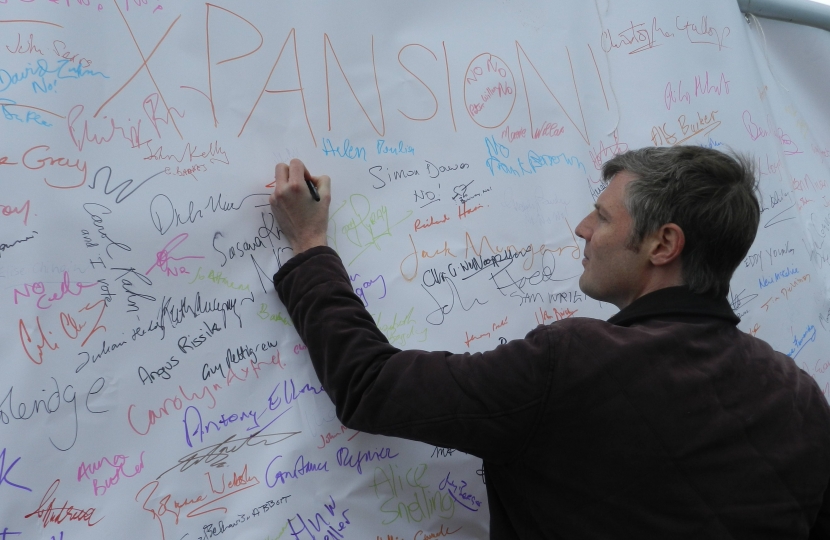 Zac has campaigned continuously to oppose a 3rd runway at Heathrow airport, which would create huge noise and air pollution particularly for local residents.

For many years, Zac has been at the forefront of the campaign against the proposed 3rd runway at Heathrow. Having led numerous rallies and petitions, he has voiced his constituents’ concerns about the detrimental effects that expansion would have on noise and air pollution. Heathrow is already Europe’s biggest noise polluter, and with a 3rd runway, over 1,000,000 Londoners could be impacted by aircraft noise.

An extra runway would also add 300,000 additional flights and 25 million more car and lorry journeys a year, creating illegally high levels of pollution in the capital. TfL have also calculated the cost to taxpayers to adapt surface transport would be £20 billion.

According to the Airports Commission itself, there would be little overall increase in the number of passengers or flights in the UK if Heathrow expands. Instead, Heathrow would take business from other UK airports. Heathrow expansion means centralizing existing activity and creating a vast, foreign-owned and taxpayer subsidized monopoly on one edge of our city. Furthermore, the Commission also concedes that a third runway would add- at most – 12 additional long haul routes; an infinitesimally small gain.

Zac has recently stepped up the anti-3rd runway campaign by delivering over a million leaflets to homes that would effected under the proposed new flight paths, and launching a website www.no3rdrunway.co.uk.

He also recently hosted a major cross party rally held in Parliament Square on October 16th2015, where MPs and campaigners spoke about the disruption it would cause to thousands of Londoners.