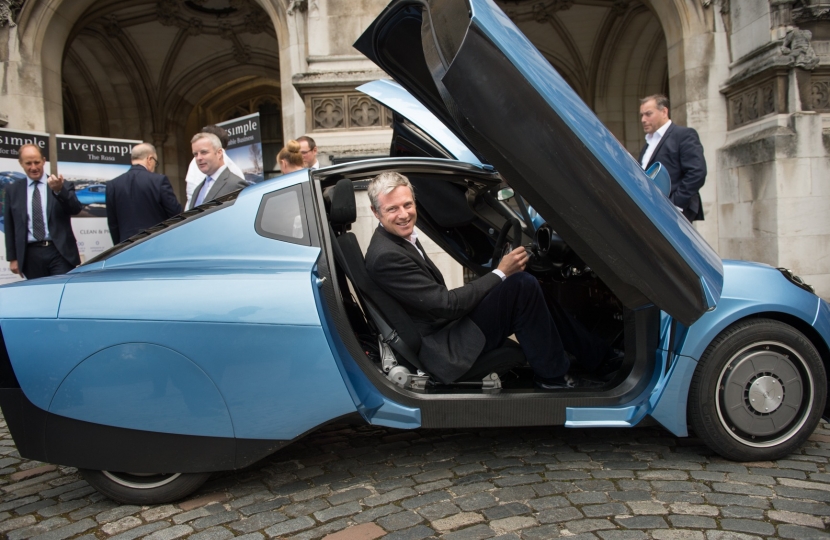 The meeting, on June 15, was facilitated after Chris Davies, MP for Brecon and Radnorshire, invited the car and its designers to Westminster to discuss the future of British design and engineering. They also discussed its longer-term plans to kick-start a new manufacturing business and community-centric hydrogen infrastructure.

Zac Goldsmith said:  “It was fantastic to meet the talented team behind the creation of this hydrogen car, which offers us a sustainable future. This highly innovative UK business, which is part crowd-funded, has the potential to radically reduce pollution and the carbon footprint of personal cars.  I look forward to seeing Rasas in Richmond and Kingston in a few years’ time”.

After the meeting, Riversimple founder Hugo Spowers said: “It was incredibly exciting to take our car to Westminster and to see the positive reactions of MPs, who were overwhelmingly supportive of both our ethos and our radical business approach.”

“The UK government has recognised the potential of hydrogen fuel cell vehicles, and has already implemented forward-thinking projects https://www.gov.uk/government/news/government-launches-2-million-competition-to-promote-roll-out-of-hydrogen-fuelled-fleet-vehicles that are promoting this cleaner alternative. I am grateful to Chris for inviting us to showcase our road-legal engineering prototype, which was designed from the bottom up for this incredible technology.”

The visit took place shortly after the Powys-based carmaker had agreed the first trial of its hydrogen-powered cars in the UK.  It is partnering with Monmouthshire County Council, to run a 12-month trial of the ‘Rasa’, which has a range of 300 miles, refills in a few minutes and has no cost premium compared with a conventional car.

In 2017, Riversimple will supply 20 hand-built hydrogen cell cars for three or six-month contracts, to be driven by 60-80 residents in the county.

It marks the start of the company’s ambitious plans to kick-start hydrogen infrastructure in the UK by developing a community of users around a single hydrogen refuelling station. As part of the initiative, a self-service, mobile refuelling point is planned for a council car park at Abergavenny or Monmouth.

Note to editors:
Over the next 20 years, Riversimple plans to build a distributed network of compact and efficient manufacturing plants that will regenerate communities and create thousands of jobs.
Company founder Hugo Spowers said: “As a Welsh company, we are excited to launch the first UK trial in Wales. The Monmouthshire and Riversimple partnership can bring a momentous change in the way mobility is delivered in a sustainable way. This trial is a first for the UK and has global significance.”

At May’s London Motor Show, Spowers unveiled two new concept vehicles https://www.dropbox.com/home/Riversimple%20PR, based on the car maker’s acclaimed two-seater ‘Rasa’ – a light goods vehicle and a four-seater car – both styled by renowned auto designer Chris Reitz.
The designs form part of Riversimple’s plans to revolutionise the motor industry by bringing affordable, cutting-edge technology to everyday road-users with a unique, all inclusive sale-of-service offering. This eliminates built-in obsolescence and flips sustainability from a cost into a competitive advantage.
The Welsh company launched the ‘Rasa’ this spring, and started crowdfunding in April to match a €2m EU grant. It also received £2 million from the Welsh Government in 2015. It plans commercially available cars in 2018. The concept vehicles will be developed at a later stage, following initial roll out.

Riversimple’s plans echo a global shift – the UK government predicts 1.3m hydrogen cars <https://www.gov.uk/government/news/future-of-hydrogen-powered-cars-mapped-out> will be on the road by 2030 and McKinsey Global Institute estimates that the clean tech product market will reach £1 trillion by 2020.

The ‘Rasa’ is believed to be the most efficient car in the world designed for ordinary road-going use (40gCO2/km well-to-wheel) and has no tailpipe emissions – just water. The car weighs just 580kg and is incredibly aerodynamic.

The ‘Rasa’ has spent 15 years in development and was styled by Chris Reitz, who also designed the Fiat 500. The team who created the Rasa hail from F1, Aston Martin, Bentley, Rolls Royce plc and other aerospace companies.