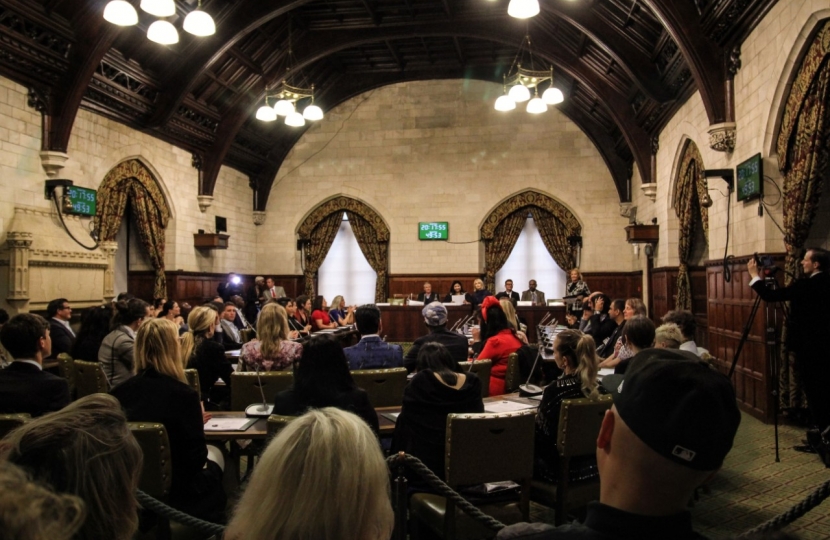 Tuesday 4th of June 2019 marked an auspicious start for the Parliamentary Society for Arts, Fashion & Sports as it was formally inaugurated at the Grand Committee Room at Houses of Parliament in Westminster.

A hearty and warm welcome and words of encouragements was delivered by the Host Zac Goldsmith MP. Mr Christian Vinante co-founder and honorary President of the society addressed all the distinguished guests, gave few honorary mentions like Mr Joe Ricotta sponsor of boxer champion Tyson Fury that wasn’t present but was sending their greetings to the society, there after he introduced the Chair and Director of the society Ms Rebeca Riofrio, who then spoke about the society, quoting’ … it is crucial to show support and educate young people in how the government serves and functions publicly. It Is through this Society that we aim to make them active and responsible stakeholders with a sense of national awareness. To this end we hope to reach out and build a bridge of trust among thousands of young people across the UK... "

She went on to state that in the current political climate, it is understandable that the British youngsters today have seemingly lost total trust to the extent of becoming disillusioned and hence detached!

Sadly, this results in horrendous consequences, for instance, the number of young people voting amounted to less than 50% compared to the over 65’s who tolled in at 78%.

One of the Society’s value is to be open, frank and transparent in their affairs without any political insulation or without ‘fear or favour’. We fervently believe, that will create trust and belief that the voice of the ‘younger generation’ can be effectively heard!’

The evening continued with brief speeches from distinguished guests and other notaries from both the local industries as well as foreign VIPs. Zac Goldsmith MP did the honours at the ribbon cutting ceremony assisted by Executive Council Members and this was witnessed by all present at this auspicious event (approximately 120 people!)

Rebeca then gave out the official Certificates of Appointments of Ambassadors of the Society. The following prominent people of diverse nationality and culture but sharing the same depth of passion for the Arts, Fashion & Sports industry were gifted the certificates:

Malan Breton – HE Ambassador of Arts for Taiwan

Just before the evening came to a conclusion, many attendees spoke briefly to air their opinions and thoughts about the ‘new society’. Most expressed gratitude and amazement and were keenly looking to getting involved with the society. All in all a rather astounding start for the Parliamentary Society for Arts, Fashion & Sports.