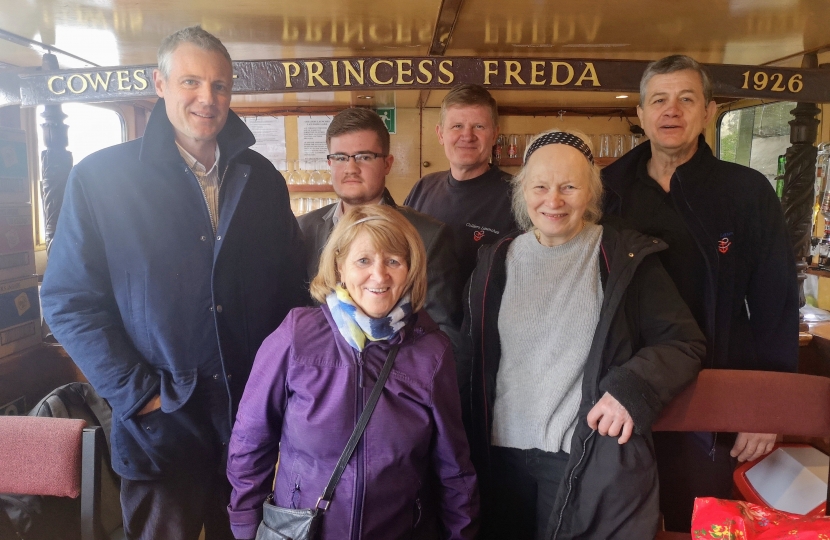 On Friday 12th April, Zac Goldsmith MP visited the Collier family aboard The Princess Freda, one of their older passenger boats based at Richmond Landing Stage. The boat had been used during the Dunkirk Evacuation in 1940.

The Collier family have operated their company Thames River Boats since 1975 serving the historic upriver route from Westminster – Kew – Richmond – Hampton Court.  The company take over 50,000 passengers a year with most journeys starting or finishing in Wesminster.

Zac made the visit with Cllr Pamela Fleming after concerns had been raised regarding the new proposed legislation from the Maritime and Coastguard Agency, an agency of the Department of Transport. The new proposals would require older passenger boats to undergo significant structural work to ensure they are meeting the new standards proposed. Envisaged works include subdividing the hull, stripping out the existing saloon and making the boats single deck, in many cases cutting capacity by half.

It is estimated that the structural renovations will cost £250,000 per boat, in addition to making them commercially unviable since renovations would remove much of the seating areas with many of the older passenger boats currently being used for river boat cruises. The regulations have serious implications for the future of many river boat busines.

The Maritime and Coastguard Agency have stated that only 4 of the 198 surviving Dunkirk little ships would be affected, however under the new proposals it is estimated that 20 boats on Thames could be scrapped including two Dunkirk Veterans.

Ultimately, these new proposals pose a serious threat to the future of these business and the wonderful historic vessels they use.

Zac Goldsmith commented about his visit: "I enjoyed spending time on the Princess Freda with the Colliers, but it is patently obvious that these new regulations will put them and others like them in the sector out of business. They have been around for a very long time, and the boat itself is nearly 100 years old. But more than that, the many thousands of passengers who are drawn to Richmond every year to spend time on their boats are enormously important for our local economy. The government is going to have to rethink its approach."

Cllr Pam Fleming said of the trip: “We understand the importance of safety, but the extent of the work required and cost will make it very difficult for many of these passenger boats to continue operating.   Tourism is important for the local economy and losing  these boats would hurt many local businesses that benefit from the  tourists who embark at Richmond  and put jobs at risk in the boatyards who service these vessels.“