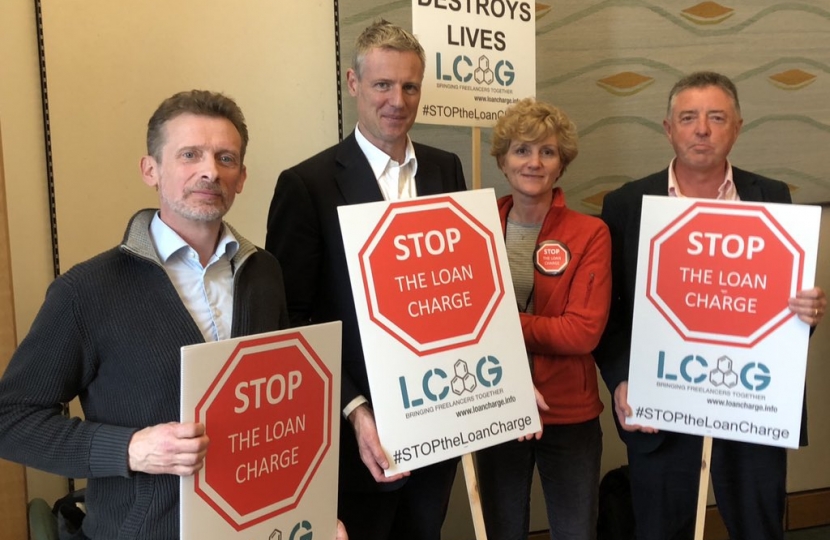 On Wednesday, 24th of October, Zac Goldsmith attended a lobby day in Parliament for the Loan Charge Action Group (LCAG).  Zac joined a group of nine of his constituents, along with fellow MPs and hundreds of affected individuals.

At the lobby meeting, those in attendance discussed a future debate in Parliament on the Loan Charge, which Zac committed to co-sponsoring.  Zac’s constituents raised with him the need for impact assessments to be made by the Treasury on individuals affected; including, how many locum doctors and nurses would fall under the retrospective changes.

Zac has previously organised surgeries for constituents and campaigners in his constituency to discuss the HMRC Loan Charge.  Tens of thousands of professionals will be caught by the unfair retrospective tax rules, which will be back-dated by 20 years and encompass historical payments.  The payments which are subject to the new Loan Charge rules were made under arrangements which were legal and compliant with HMRC rules, as assessed by a number of eminent QCs at the time those arrangements were entered into.  Those affected include doctors, nurses, teachers, social workers, and many small businesses.

Constituents and campaigners have highlighted to Zac and the Government the risk that back-dated tax collection by HMRC will force thousands of individuals into bankruptcy arrangements.

Zac agreed to sign the Early Day Motion (EDM 1239) in Parliament, which has now been signed by 95 MPs, in support of his constituents and the campaign.

“I am calling on the Government to respond to the justified concerns raised by both my constituents and the Loan Charge Action Group, in response to the Loan Charge 2019.  Retrospective taxation is neither fair nor transparent.  Payment arrangements which are included under the scope of the Loan Charge were legal arrangements made by tens of thousands of individuals; HMRC have also been aware of their existence for decades.”

He added: “those who will be financially penalised under the Loan Charge are not wealthy tax dodgers, they are hard-working, self-employed professionals and contractors, who have been required to enter into arrangement at the cost of paid annual leave and other benefits which are afforded to employees.  These arrangements were legal, and that has been verified by specialist tax lawyers.  For HMRC to retrospectively change their own regulations and threaten the viability of small businesses, risk mass bankruptcies, and take back wholesale the retirement savings of thousands of hard working taxpayers, is entirely wrong.”