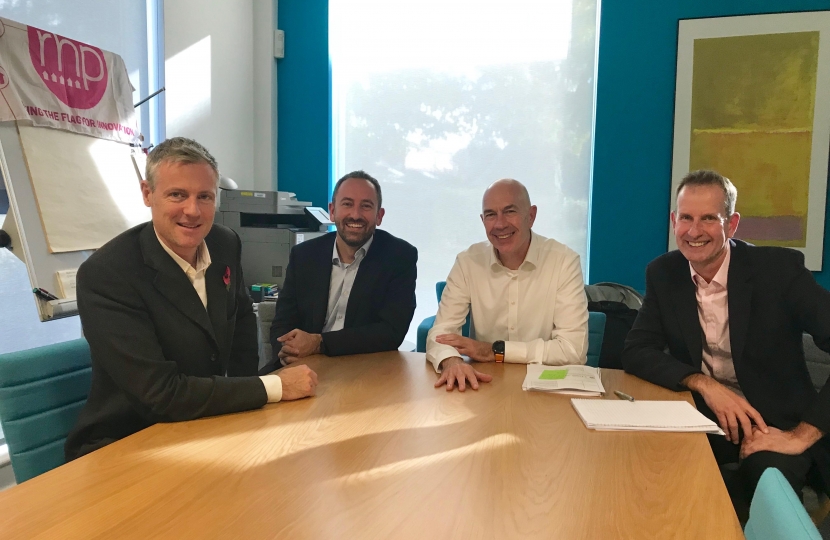 On Monday, 29th of October, Zac met with Mr David Done, Chief Executive of the Richmond Housing Partnership (RHP), alongside Mr Robert Dobbs, Executive Director of Customer Services, and Mr Tim Willcocks, Executive Director of Development, to discuss a number of concerns local residents have raised with Zac at surgeries in the constituency.  A particular focus of the meeting was anti-social behaviour complaints raised by both RHP tenants and other residents, neighbouring RHP properties, in Richmond and North Kingston.

The RHP updated Zac on the status of several outstanding cases which he had raised on behalf of his constituents, who are tenants in RHP housing.  Zac was able to progress enquiries and discuss issue ranging from household repairs to adjustments and modifications for disabled residents in the constituency.

Zac additionally raised RHP’s processes and involvement in tackling anti-social behaviour.  As a social landlord, RHP often work concurrently with the local Safer Neighbourhoods Teams at the Police and with social services at the Council.  Zac highlighted the importance of all parties involved, particularly when addressing disruptive anti-social behaviour in the constituency, to work closely to target and prevent disruption to residents who are the victims of harassment or other criminal behaviour.  RHP discussed their ongoing co-operation with multiple agencies to address the concerns raised by both residents and Zac on their behalf.

Invariably a number of the cases raised involved difficulties which result from complex mental health needs, and Zac offered his assistance with regard to liaising with the Police and other services to ensure that adequate support is in place to protect residents.  The meeting was successful and productive in progressing Zac’s cases, and in ensuring that he and the RHP will maintain an open dialogue to facilitate, whenever possible, the expeditious resolution of his constituent’s cases. Larger projects were also discussed, such as the Mortlake Brewery and Ham Close developments, along with the RHP’s future plans to build more social housing in the Richmond Park and North Kingston constituency.

Zac said of the meeting: “It is always extremely useful to see David Done and his colleagues to discuss my constituents’ pressing cases.  I always leave with a more comprehensive view of the work which RHP undertakes, and I hope to work together with the RHP further on some of the more complex and ongoing cases.  I was also pleased to hear about their innovative and ambitious plans to provide affordable housing to many of my constituents.”