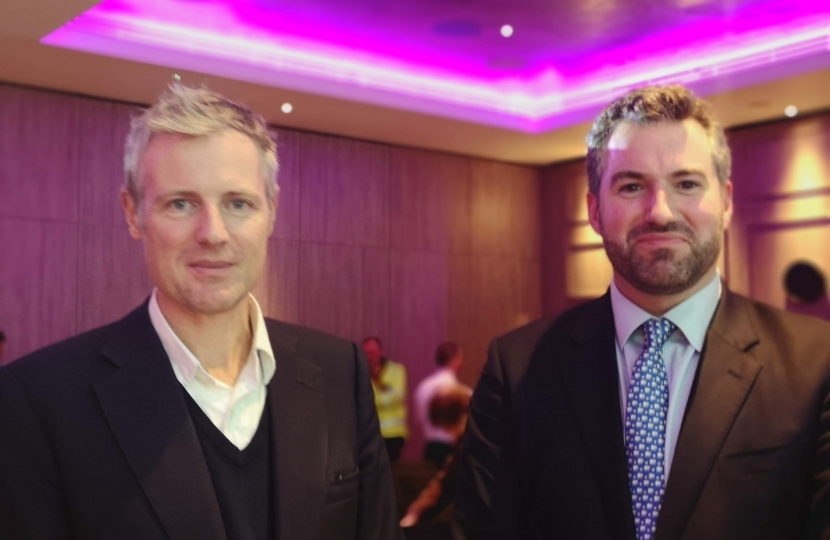 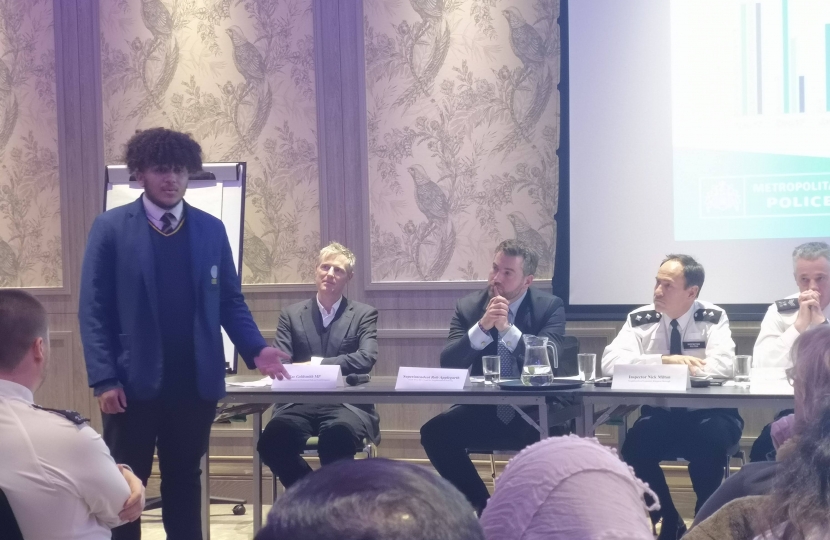 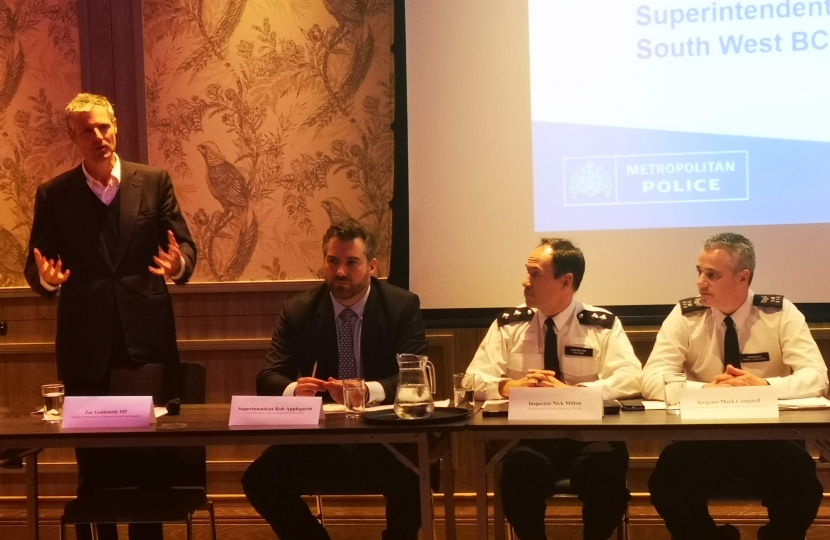 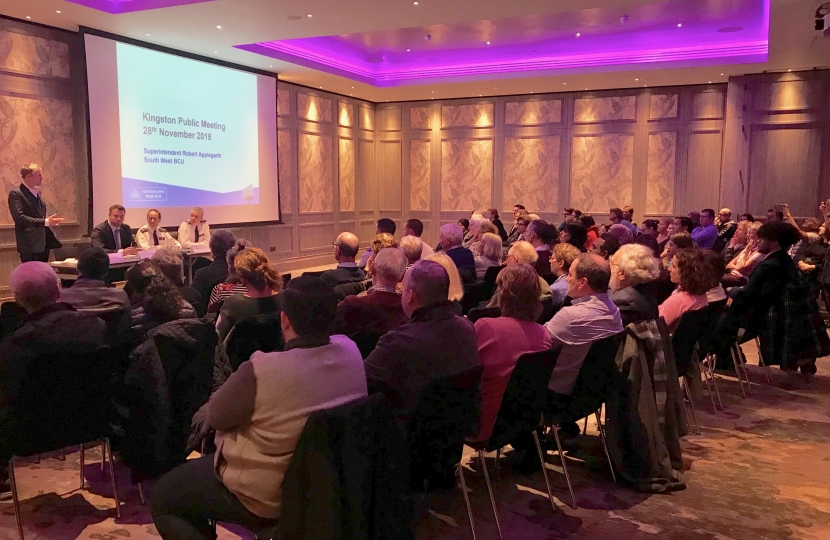 On Wednesday, 28th of November, Zac Goldsmith hosted a public meeting at the DoubleTree Hilton Hotel in Kingston to discuss Crime and Safety in North Kingston.

At the start of the meeting, Superintendent Applegarth presented figures covering crime and policing in Kingston to the assembled residents.

Members of the audience raised concerns around worsening response times of the police since the local station moved to Twickenham.  The Superintendent was able to assure the audience that the average waiting time for category ‘I’ calls, which are assessed by the Police’s control room as requiring an immediate response, is well below 15 minutes across Kingston and Richmond Boroughs.  Additionally, the Superintendent advised the audience that over 70% of category ‘I’ calls in the area are met with a police response within 15 minutes.

The Police addressed the perception that there has been a significant increase in crime in North Kingston.  Statistics provided by the Police demonstrated that, despite an improvement in the accuracy of the recording of reported crimes, the number of offences committed in the area had fallen since 2005, reaching an all-time low in 2015/16.  The Police reassured residents that they were allocating and prioritising resources in order to strategically tackle the evolving pattern of crime in the area.

Following the presentation, Zac facilitated a discussion between local residents and the Police.  Specific neighbourhood issues were raised, including recent burglaries in Ham, which Zac had discussed with the Police earlier in the month (https://www.zacgoldsmith.com/news/zac-goldsmith-mp-raises-burglaries-and-car-thefts-ham-police).

An audience member raised the effectiveness of custodial sentences as a deterrent to prevent young people from engaging in crime.  Superintendent Applegarth, who is a youth offending board member for the four boroughs which he oversees, acknowledged that effectively reducing crime, and discouraging further criminal behaviour after arrest, trial, and sentencing, is a complex issue and a priority.

One audience member expressed the view that greater funding was needed for the Police from the Government. On the question of funding, Zac set out how he has personally campaigned to ensure that the Police’s budget was protected from significant potential budget reductions. Zac added that he had come from a meeting with the Prime Minister where he specifically raised the issue of police funding.

The audience and the panel discussed the tactics adopted by police in tackling moped crime, including making vehicular contact with suspects on mopeds.  Zac expressed his support for the Police employing robust tactics, and ensuring that the Police have the powers they require in order to effectively tackle crime and catch criminals, so that they can be successfully prosecuted and the public protected.

The Christ’s School in Richmond was represented at the public meeting by Coby, one of their Year 11 pupils, whom Zac met when he recently visited the School to discuss the pupils’ citizenship campaign projects (https://www.zacgoldsmith.com/news/zac-goldsmith-mp-visits-christs-school-richmond).  Coby spoke to the audience about his group’s campaign, ‘Lives not knives,’ and their work to raise awareness of knife crime.

After the Q&A, Zac introduced the audience to Mr Les Jackson, a recently retired Police Sergeant who served as a police officer for over 30 years, who is now an independent, self-funding activist who raises awareness of scams and teaches the vulnerable how to protect themselves and remain vigilant against fraudsters.

Mr Jackson said: “I started the campaign as a result of speaking with an 82-year-old woman who had her life savings stolen by way of a scam.  The woman was left devastated and penniless, resulting in life-changing problems.  Fraud is on the increase, however since I began this quest I am pleased to say that the offences within Richmond have dropped dramatically.  I believe that this is a direct result of the scam presentations and working in partnership with outside agencies.”

Following the public meeting, Superintendent Applegarth said: “it was a very challenging evening, an interesting evening, to hear from local residents. There is definitely a sense of fear of crime, and a definite sense that the local community here in the Kingston Wards of the Richmond Park Constituency want to hear more from us; more communication. They want us to be better plugged into their social networks.  So that’s the real piece of work that we’re going to go away and try and look at and try and develop.”

Zac Goldsmith said: “I am very grateful to Superintendent Applegarth, Inspector Milton, and their colleagues, and to Kody and Les Jackson for attending on Wednesday evening.  It was a valuable opportunity for the Police to hear the concerns and priorities from different neighbourhoods and to report back on their own work.”

The state of the environment

One issue that has so far not featured enough in the General Election is the state of the environment – here and around the world.

I invite you to watch this short film on my environment work and priorities, and to help me share it far and wide! Please click here.