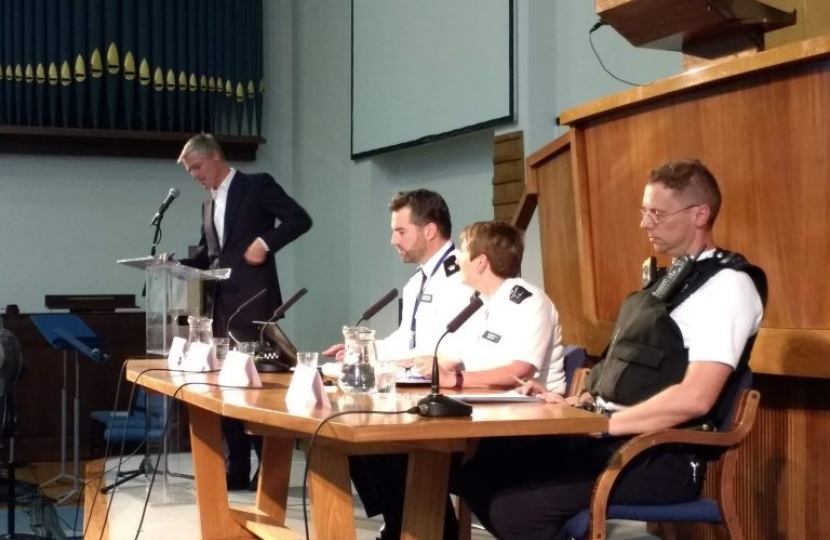 Superintendent Applegarth led with an update on the re-organisation of the Police across Richmond Borough and a presentation covering the Borough’s crime statistics with a comparison with other London Boroughs.  Zac repeated an offer to take any concerns the Police may have to the heart of Government, to ensure that they have the powers and support which they require in order to tackle crime.

Zac took questions from the audience and facilitated a discussion, which allowed the residents to raise their concerns regarding recent burglaries, cyclists using pavements, anti-social behaviour, the sale of controlled substances, and other criminal activity.  Sergeant Metcalf and Sergeant Shalders were able to provide a local policing perspective for the areas which they oversee, including Ham, Petersham, and Richmond Riverside; East Sheen; Barnes; Mortlake and Barnes Common; and Kew.  The audience shared their specific ideas regarding closer co-operation between the Police and Neighbourhood Watch, and giving either the Police or other enforcement officers sufficient powers to tackle anti-social behaviour.

Afterwards, Zac Goldsmith said:  “Richmond residents are aware of the rising crime across London.  Whilst Richmond has largely bucked the trend, particularly with regard to serious violent crime, we must never be complacent.  I want to ensure that the Police have the necessary powers to protect the public by pursuing and arresting those who break the law and victimise others.”

“I want to thank Sergeant Jan Metcalf, Sergeant Matt Shalders and Superintendent Rob Applegarth for taking part in the public meeting. Theirparticipation and ongoing efforts are much appreciated by me and by the residents. I am glad there was such a high turnout on the evening and that so many residents were able to ask questions.”

I will continue to pressure Government to ensure our police are properly funded. I have lobbied both the Home Secretary and Police Minister for additional funding for London's police and have raised concerns about the 101 system for reporting crimes.