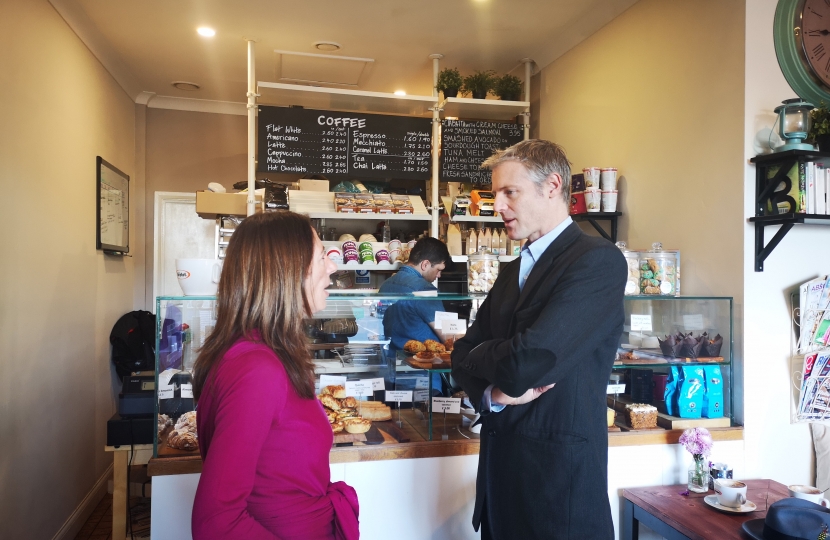 Zac Goldsmith MP visited Coffee and Cakes in East Sheen on the 19th October to discuss its owner’s mission to become a plastic free café.

Stana from Coffee and Cakes said:

“The numbers are simply staggering. We use 2.5 billion disposable coffee cups every year in the UK. It is far too easy to feel apathetic and overwhelmed by the sheer scale of this figure, but when I really and truly asked myself what I could do, the ideas began to flow and the quest to take action grew.

I acquired my shop in 2015, and rebranded in 2017 when it became known as the Coffee & Cake Co. As a business that is focused on serving the local community and meeting their dietary needs (from unique blends of coffee to organic, gluten free and vegan food), I began to realise how current the subject of the use and abuse of plastic actually was.

Discussing this issue with my customers brought to the fore their concerns and experiences. For instance, one of my customers, whilst swimming in the sea on holiday, had found herself battling against a multitude of plastic bags. This story alone made me question whether my business was doing enough.

After much thought, we made a public pledge to reduce plastic in the shop as much as we possibly could by the end of 2018. We gave ourselves a ‘to do’ list, and with great enthusiasm and support from our customers, began ticking off items that were completed.

1. We reduced the price of a coffee by more than Starbucks if members of the public brought their own cup

2. We started to sell reusable and innovative collapsible pocket-sized cups.

3. We moved to biodegradable cups, even though the cost increased.

4. We began to use paper bags and biodegradable packaging for take-away food.

5. We wrote to our suppliers and asked for their support, as doing this alone was not an option!

But was this enough? A quest to be plastic free may well have seemed rather incongruous without the support of other local businesses, so we asked like-minded people to join us and be part of a growing movement that projected a message of ‘yes we can’ rather than a collective ‘why bother’.

We aim to take this local momentum further, as what motivates me is seeing the headline:

Alas, this is in the Netherlands, but it could be the UK next, depending on how committed we are to this cause.

We have to look to the future and remain positive and productive, so the next generation inherits a world where they can live and thrive in. Surely, that’s a goal worth working towards.”

Zac said: "We have treated the world’s oceans as a rubbish dump for years and the effects on the natural world have been grotesque. Millions of us have seen Blue Planet and even if we didn’t know about the problem before, we do now. We all have a role to play, and I would encourage all the shops in the area to get on board with this wonderful initiative.”