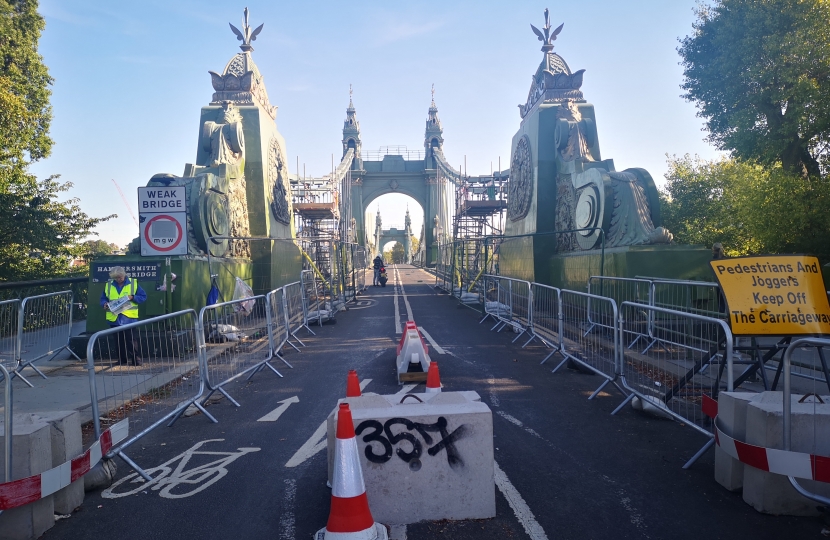 Richmond Park and North Kingston MP Zac Goldsmith has written to the Secretary of State for Transport and the Minister for Arts, Heritage and Tourism respectively, to urge them to make sure that all reasonable options for works to reopen Hammersmith Bridge are fully considered by Transport for London (TfL) and Historic England.

At present, Hammersmith and Fulham Council, which owns the bridge, and TfL have considered three options and have chosen to proceed with restoring the bridge to its original level of operation – this is anticipated to take three years. The alternative options considered included keeping the bridge closed to motor vehicles or reinforcing the bridge to enable it to handle more buses.

At Zac’s request, TfL has agreed to look at whether a further option is possible of using a high tensile steel surface placed above the current surface to take the strain of traffic, without requiring substantial work to the original Grade II listed framework. Based on initial findings, this option would be cheaper and a considerably quicker. However, TfL have informed Zac that they have not yet looked at this option as it is currently likely be opposed by Historic England.

Along with neighbouring MPs Justine Greening and Greg Hands, Zac has written to the Secretary of State for Transport Grant Shapps MP and Minister for Arts, Heritage and Tourism Helen Whately MP urging them to intervene to ensure this and any other feasible option is duly considered, especially if it could see the bridge opened sooner and at less expense.

Zac commented: “I strongly believe we need to see the bridge re-opened as soon as possible to serve residents either side of the bridge. That means Hammersmith and Fulham and TfL actively looking at every option.”

To keep up to date with recent developments around Hammersmith Bridge, please see below.