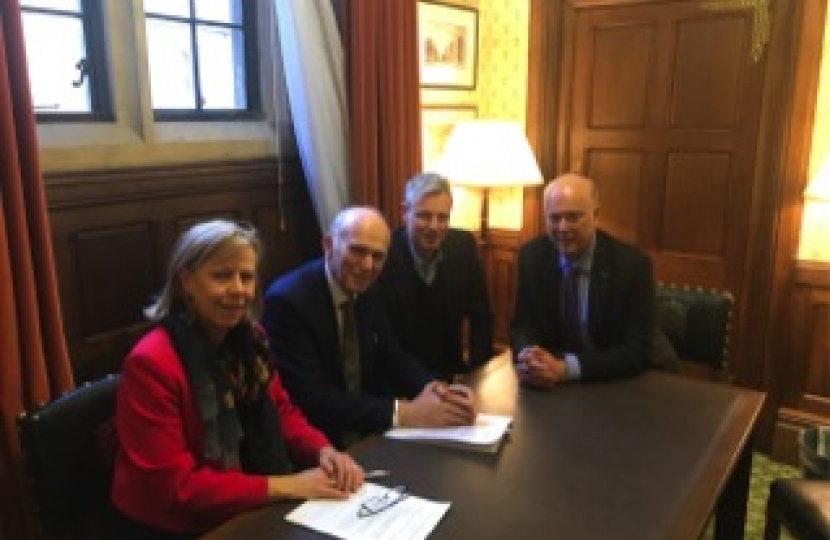 A cross-party group of MPs met with the Secretary of State for Transport to express their concerns about the proposed expansion of Heathrow.

The MPs stated that the Airports NPS is insufficiently robust on the key impacts of Heathrow expansion particularly, air quality, potential costs to taxpayers and the absence of detailed flight path information.

The Transport Secretary confirmed that the Government intends to write conditions into the Development Consent Order that would place operational restrictions on Heathrow should they fail to meet air quality standards.

Mr Grayling agreed to look closely at the costs to local authorities resulting from the relocation of the Lakeside Waste plant, admitting that it was not something that he had detailed knowledge of.

He stated that the proposed night flight ban would be applied more strictly than the existing agreement although he could not state that there would never be flights in this period.

He also revealed that the community compensation and mitigation packages offered by Heathrow would be mandatory should planning permission be granted for a third runway.

Zac Goldsmith MP said, “I am grateful to the Transport Secretary for listening to our concerns. The case against Heathrow expansion continues to deepen; there are financial, political, environmental and legal obstacles that simply cannot be overcome. Any planning conditions imposed on the Heathrow is likely to result in operational restrictions that render their third runway unviable.”

Ruth Cadbury MP said, “The absence of detailed flight path information is fundamental to understanding the impact on local communities of the proposed third runway, particularly the final locked-in approach path. A vote in parliament should not take place until this information is publicly available. It is also evident that the noise insulation packages offered to communities are far from world class and that further research needs to be undertaken to understand the potential loss of respite.”

Rt. Hon. Sir Vince Cable MP said, “The fact that Heathrow continues to seek financial protection from the CAA and the Government for its third runway clearly demonstrates that the airport has no faith in their ability to deliver their own project. The Government’s own figures call into question the alleged economic benefits of the scheme and it is far from clear what benefits, if any, will be accrued by local communities.”

Continuing to Champion the Fight Against Heathrow Expansion

As chair of the All-Party Group, I am building alliances across Parliament. I have set up a powerful new Coalition Against Heathrow Expansion, bringing together all the key campaigners.