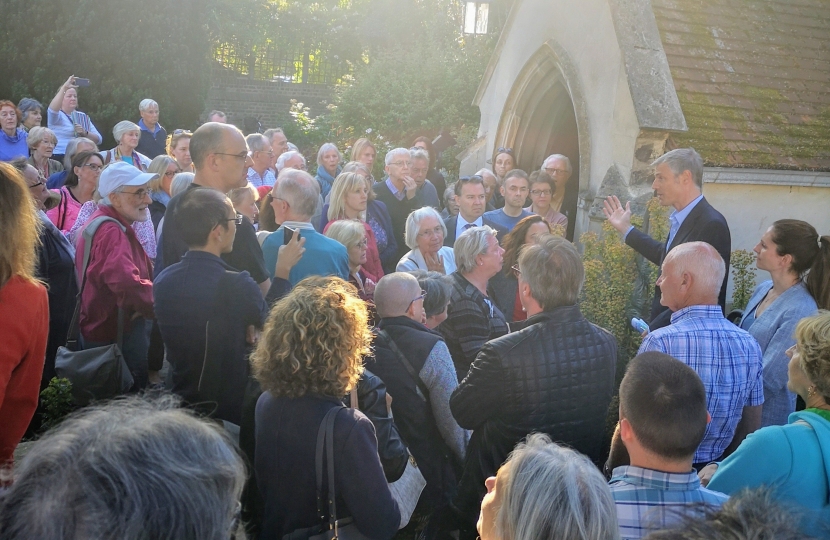 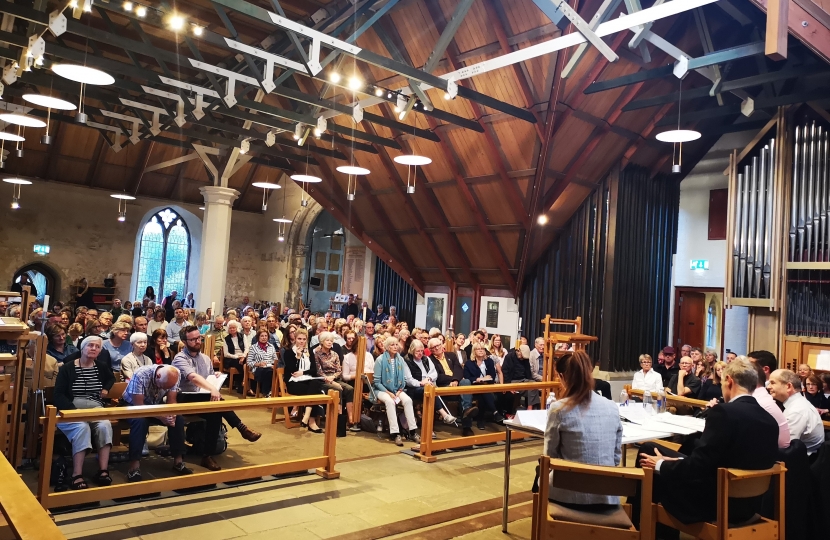 Around 500 people turned up at St Mary’s Church in Barnes on Thursday to hear the latest news on when the bridge will be repaired and reopen but only around 250 could get in.

However, the Richmond Park and North Kingston MP quickly went outside and told those without a seat to wait. He then completed the first meeting in 45 minutes before allowing the overflow into the church for a second session.

The event was a chance for residents to put their questions and concerns to Transport for London (TfL) about the Hammersmith and Fulham Council-owned bridge that closed on April 10 due to ‘critical faults’ following a routine inspection.

The move has caused major disruption across Zac’s constituency with Barnes, Mortlake and East Sheen most affected.

“Residents’ feelings are clearly running high about the closure of this bridge, the lack of information about the next steps, why it got into such a bad state in the first place and a timeframe for completion of repairs,” said Zac.

“As I said in both meetings, this is not a party-political issue but a practical one that is causing many thousands of people – many of them my constituents - major disruption to their lives and it needs to be solved.

“Bus routes have been changed and emergency services are struggling to get into my constituency, so these are real concerns as shown by the sheer number of people who came last Thursday.

“I’m glad I was able to have two meetings and hundreds had their chance to ask questions, express their thoughts on bus timetables and give suggestions to TfL on what should happen.”

The Richmond Park and North Kingston MP added: “I look forward to working with TFL to ensure it chooses the right option for our residents and has the resources it needs to complete the works as quickly as possible."

During the Q&A, residents put forward a range of options including a temporary bridge being erected, and relocating the bridge and replacing it with a replica. Residents emphasised that any work carried out should ensure it lasts long term.

Barnes Councillor Aphra Brandreth explained the closure meant emergency services were not able to use the bridge to access the Barnes community quickly and she reiterated the importance of coming to a solution as soon as possible.

Nick Fairholme TfL's Director of Project and Programme Delivery  said it was working closely with Hammersmith and Fulham Council to identify the best option for the bridge works, and to secure funding.

He added TfL supported the decision to close the bridge and a range of options were under consideration.

In the meantime, further buses on the 33 route are to be introduced and TfL said it would look into concerns over the limited timetabling of the 533 route, the 72 finishing at the north side of Hammersmith Bridge and the rerouting of the 209 service.