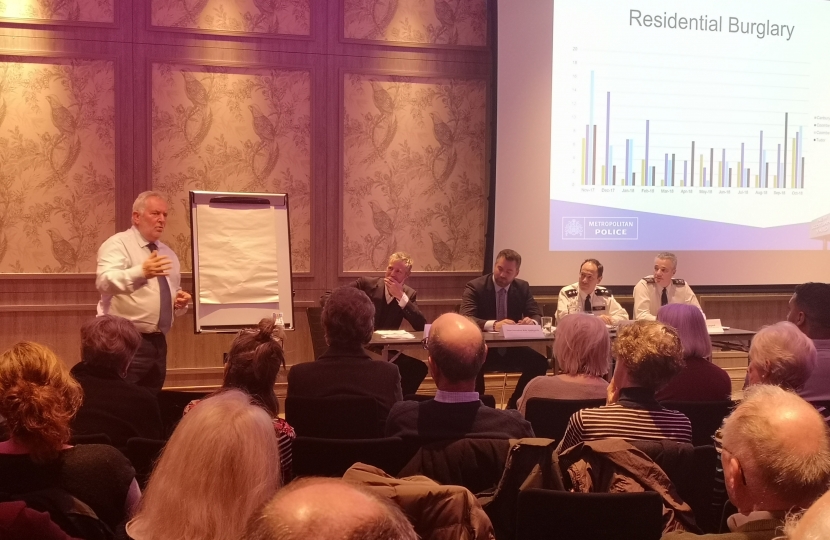 On 29th December 2018, retired police officer Sergeant Les Jackson, formally of Richmond Police, was awarded the Queen’s Police Medal at a ceremony at St. James’s Palace in London as part of the New Year’s Honours.

Before his recent retirement, Les was a Sergeant with the Metropolitan Police, based at Teddington police station, where he was a member of the South Richmond Safer Neighbourhoods Team.

He served as a police officer with the Metropolitan Police for over 30 years, where he was known locally for raising awareness and championing the protection of residents against cyber-crimes.

Now in retirement, he continues his work as an independent, self-funding activist, who campaigns and gives support to residents against crimes of scamming, particularly for the elderly and vulnerable individuals targeted by these crimes. He achieves this by hosting events within the community to highlight the dangers of scammers and for people to remain vigilant.

Police Commissioner Cressida Dick, when speaking about the awards achieved by officers, said: “This is a truly exceptional New Year’s Honours List for the Met. I am very proud of them all and that they have been recognised in this special way. Many congratulations.”

The Queen’s Police Medal is awarded for distinguished services to policing, specifically for "acts of exceptional courage and skill at the cost of their lives, or [exhibiting] conspicuous devotion to duty". Including Les, 30 rank and file officers from across England and Wales have been recognised in the 2019 Queen’s New Year’s Honours.

Zac Goldsmith MP, who has supported and advocated for this public recognition of Sergeant Leslie Jackson for his police work, said of the award:

“I have known Les for many years and I am delighted that his work has been recognised with this esteemed award. He has made a profound impact on the local community and his care and support of the residents have made this a safer and better place to live. Les absolutely deserves this acknowledgement for his tireless efforts.”