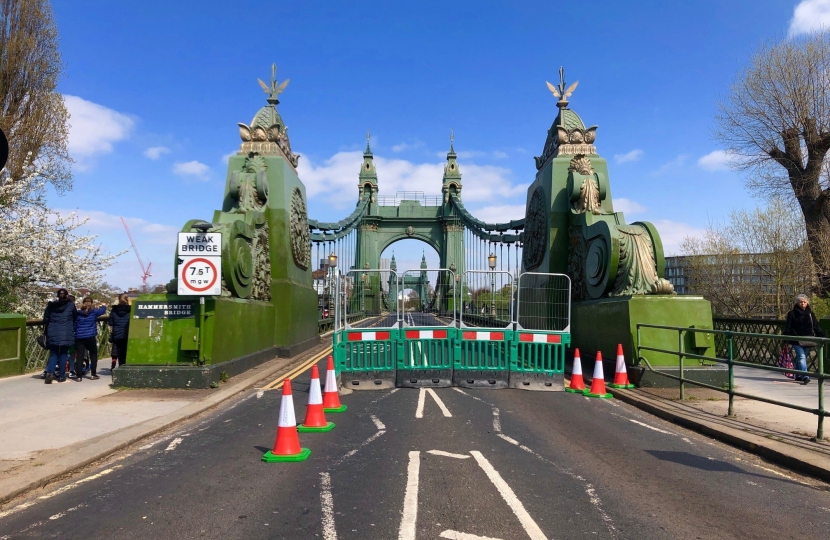 1.1         The bridge is Grade II listed and was built in 1887. It is a wrought iron suspension with a wooden deck supporting steel plates. It is owned and managed by the London Borough of Hammersmith & Fulham (LBHF) as the Highway Authority. Until its recent closure, it carried the A306 and over 20,000 vehicles per day.

1.2         A 7.5 ton weight restriction had been in place since November 2016, meaning only single decker buses were permitted, with a maximum of one in each direction at any one time.

1.3         Over the last two years, a series of detailed inspections and tests have determined the condition of the bridge and scoped the planned strengthening work.

2.1         At around 17:00 on 10 April, LBHF’s contractor found severe cracks on cast iron pedestals on the bridge. LBHF officers visited the site to confirm the finding and took the decision to close the bridge to motorised vehicles immediately.

2.2         As a result of the closure, we have made the following changes to the bus routes which normally use the bridge:

Will terminate on Castelnau, south of the river and no longer serve Hammersmith bus station

Diverted at all times via Lonsdale Road, Mortlake High Street and Chiswick Bridge between Castelnau and Hammersmith. No longer serves Hammersmith Bridge north side bus stops.

Will terminate on Lonsdale Road, south of the river and no longer serve Hammersmith bus station

2.3         Staff at Hammersmith bus station are helping customers with their journey choices, and TfL have positioned on-street teams at each end of the bridge to manage the closure, and help bus customers with routes to take for their onward journeys.

2.4         There is a dedicated page on the TfL website, publicity is posted at bus stops and announcements are playing at tube stations and Hammersmith bus station to alert customers to the bus diversions.

2.5         There is congestion in a small number of locations, including Fulham Palace Road northbound and Lower Richmond Road. TfL’s traffic control centre is monitoring and managing this.

3.1         LBHF have said that, as things stand, the closure will remain in place until refurbishment works are completed.

3.2         TfL are working up longer-term plans for the local bus service to ensure it meets customer demand. We will confirm and publicise these changes in the coming weeks.

4.1         A longer-term solution clearly needs to be found urgently. LBHF is the asset owner and highway authority for the bridge. We are ready to support them in identifying a proposed solution and the necessary funding for this work

4.2         The structural form of the bridge and the material types (e.g. wrought iron) mean it is a complex and unique project, the challenges and costs of which are exacerbated by working over the Thames.

5.1         TfL intend to continue to work closely with the borough and ensure the necessary engagement, communication and service plans are delivered, and support LBHF in identifying funding sources

The state of the environment

One issue that has so far not featured enough in the General Election is the state of the environment – here and around the world.

I invite you to watch this short film on my environment work and priorities, and to help me share it far and wide! Please click here.