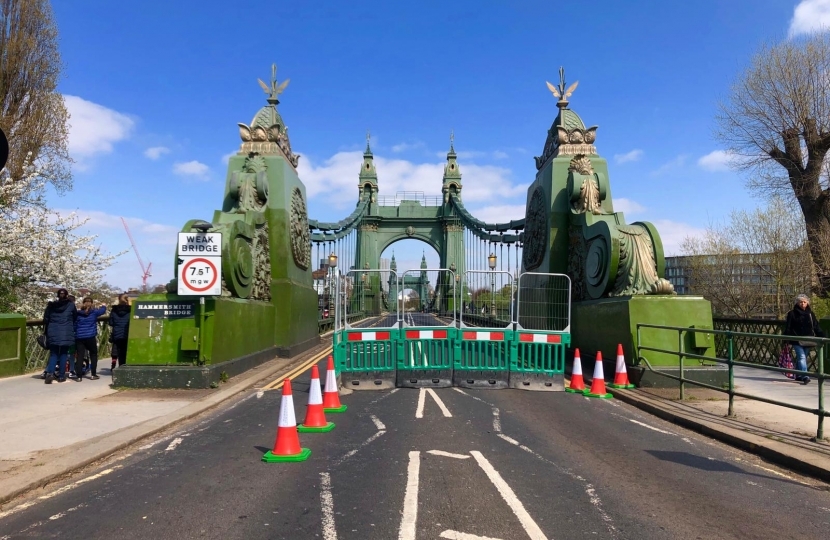 I wanted to update you following my meeting last Friday with TfL officials and Barnes Councillors Aphra Brandreth and Paul Hodgins to discuss the Hammersmith Bridge closure. This follows an update I sent last week (See Link).

The three options Hammersmith & Fulham (H&F), who own the bridge, and TfL have looked at are a) keep the bridge closed to vehicles, and open only to cyclists and pedestrians; b) restore the bridge to its usual level of operation, or c) reinforce the bridge so that it can handle more and bigger buses as well. Given the gravity of the problems affecting the bridge structure, the costs are estimated at £70m, £120m and £150m respectively.

H&F and TfL have chosen to proceed with option B – restoring the bridge to its normal functions. It will take three years. That is around a year and half quicker than Option C, and marginally longer than Option A.  The option of constructing a tunnel has been deemed too expensive and too disruptive.

I have asked, and TfL have agreed to look at whether a further option is possible of using a high tensile steel surface placed above the current surface to take the strain of traffic, and without requiring substantial work to the original bridge structure. Based on what I have been able to ascertain, that option would be cheaper and a great deal quicker. The reason TfL tell me they haven’t looked at this option is that it would likely be opposed by Historic England. My very strong view is that we do need to explore this option – and I have asked the Secretary of State if he will be willing to support our doing so. TfL will be consulting with Hammersmith and Fulham, and subject to their views Historic England.

I have also asked TfL to look at increasing the frequency of the 533 bus, and they have agreed to keep this under review.

There have been discussions about introducing a toll system for the bridge – to help pay for it – and I have asked our London Assembly Member Tony Arbour to seek assurances from the Mayor of London that Richmond residents would not be required to pay more than Hammersmith and Fulham residents (as has been mooted by various politicians in our neighbouring borough).  The option of a toll is something that myself and the conservative councillors would have to be convinced of. It certainly wouldn’t be a preferable option at this stage.

A temporary bridge is being considered for pedestrians and cyclists (motorbikes will still be able to be wheeled across) whilst repairs are being made to the structure of the bridge.  Further information will be provided on this in the coming weeks.

Finally, I wanted to make you aware of a shuttle/cab service being introduced for vulnerable residents who need to access Hammersmith. For more information please see HERE

I will continue to keep you updated.

To keep up to date with recent developments around Hammersmith Bridge, please see below.